His name is Blanke and he’s anything but silent. Surfacing in 2016 and amassing millions of streams since, Blanke has continued to dominate the bass scene across the globe. In fact, before even playing a single show in North America, Blanke has found himself on 2019 Artists To Watch lists compiled by the likes of YOUREDM, Billboard, Noiseporn, and more. We couldn’t agree more. Blanke is really stirring things up. Blanke recently had a huge Collaboration with global superstar REZZ in “Mixed Signals,” signed a new deal with United Talent Agency and performed his first North American shows. He’s wasting no time and this weekend he’ll be in town with Zeds Dead for Deadbeats 420! Check out what he had to say below. 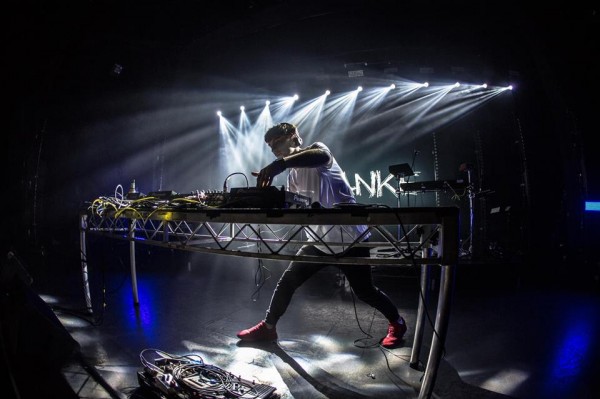 You have a new song coming out next week just days before you take the stage at Deadbeats. What can you tell us about it?

The song coming out next week is called Contact and it’s with ATLiens. It’s one of my heaviest tracks to date and it consists of 3 drops, all just a little bit different in style which I really love.  For the last drop, we used a hardware synthesizer to create some ridiculous sounds. It all came together really easily which is a credit to the enjoyment we had making it.

You’ve worked with a variety of labels. How has Deadbeats compared?

Deadbeats have been very supportive which is exactly what you want from an artist perspective. They are enthusiastic about music and my art and are organized and easy to work with. I’ve always loved the vibe of Deadbeats, its dark, its cool and its heavy. I’ve always felt my music would fit there!

You just curated a Deadbeats 420 Playlist for us. How did you choose which songs to include?

Each song is one that is exciting to me in dance music right now. There a lot of AWESOME music around at the moment. There is a lot of experimentation and evolving going on and a lot of it are from friends of mine. It’s really inspiring to watch.

It’s been just a couple years since you’ve started gaining traction in the scene. Last year was especially huge having released Sneaky Plans and a handful of singles, one of which was a collab with REZZ. What major plans do you have for the rest of this year?

The past twelve months have been absolutely unreal. Lots of growth, lots of music and lots of friends made! I’ve just moved to the States, so I plan on doing plenty of shows in North America and a few international ones too. Playing a few of my absolute DREAM festivals in the USA this year, some announced and some unannounced! I’ll be going back home to Aus for a tour in August as well as China and Japan for the first time! Lots more music and collaborations, working on some things with artists I’ve looked up to for ages at the moment so it’s really exciting! Oh and will definitely starting up another garden in my new LA home!

I’ve always commented on how different the culture for Electronic music is between the two continents. As the scene is a lot bigger here in the States it means it’s a lot more full as there is just more of a population and therefore the ties are naturally deeper. There’s definitely a sense of ownership toward the culture and I really love that. Australians have the same kind of passion just in a different and less flamboyant way. Lots of artists will say the Aussies go the hardest!

Your remixes have seen huge success. How do you decide what remixes to pursue?

A lot of the remixes have come about naturally and thankfully have done well in their own rights. I often talk it over with my manager. We see if I connect with the track and if I could make something I really love first and foremost. As I’m growing in musical maturity I’m more excited to take risks and try something new with the remixes and the directions I take with them.