DJ and producer DEVAULT may be an up and comer in the industry, but he’s already solidified himself as a change maker. Since 2016, DEVAULT has been gaining recognition at an exponential rate and he hasn’t slowed since. As he was getting his start in music he drew inspiration from the varying sounds of Depeche Mode, Flume, and RL Grime. Such influences have allowed him to create his own unique sound that pulls elements from the very best and have earned him millions of streams. He went all in during his Phoenix Lights set, but first, we sat down and talked all things DEVAULT. 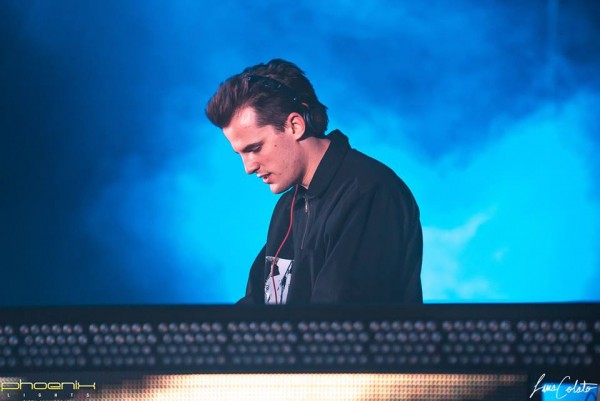 You just released a new song TODAY. (See Below!) You said it’s the foundation of Jade. What else can you tell us about Jade?

I put out “Runway” as a single and it’s the first song of a bundle of dark tracks that make a mini EP and I’m calling it Jade. It’s basically taking my original melodic chill sound and flipping it on its head and doing something more dark and raw that has no boundaries. It’s music more tailored for a live show, that way when it comes to my set it can have a glimpse of this melodic energy and this dark energetic music. It’s gonna be four songs; it comes out on the 26th and comes with a short film as well.

I saw on Facebook you said it’s best experienced through the visual program. This seems to be a trend lately, to release a film with alongside collection of music. What does that mean?

I have an amazing artist who does all of my video stuff and we put together a short film for it. Jade is a color we really wanted to focus on in the video and the cover art, and it definitely represents the music in a sense. We’re doing these videos because I want to do multiple takes where thse four tracks with jade and then four tracksin the future with another tape and then anotjer tape so that when fans come to my shows and fans kind of get a glimpse of the different sound scapes i enjoy and how i can bring it to a set and make it exciting. it’s basically a small narrative and visually engaging and tailored to my live show.

You released your debut EP Stay late last year. How have things changed for you since it’s release?

It defintly set the foundation for me to be singular artist. it finally defined my sound and what i’m about and there was a few songs that really caught on liek nothing but you and satay and inbetweent he words they really did eell and kind of changed the pace for my musical journey and where im headed it’s different form doing pipular remixes, like people might know me from that bt they don’t really undertand my full musical jounrey and what the definition of devault is so tis ep kind of set the tone and then moving forward it’s just building off that.

You’ve been doing some killer remixes lately… RL Grime, Black, Alessia Cara… how do you choose which tracks to remix? How have those remixes helped build your career?

I rmemeber in the beginining doing am officail remix for rhianna definietly opened a lot of doors n the professional space where after doing this rhianna remix i get hit up to do a ton of other remixes. it really got the ball rolling for things and i’d sa it just bring more of a general crowd onto devault and who i am.

You said you played the set of your life at Holy Ship. What to you makes a really great set?

i think a few thinsgs. the evenrgy defintyl has to be special within the crowd and honestly i like small intimate shows where there can be artista nd friends behind ebcause they ca nhelp with the energy beased on how much fun theyre haivn,. that’s why i had such a fuun set because there were so many artist in the back that i  really like and weer having a good time and the crowd was loving it. it wasnt a huge spot, about 200 people but it was  just jam packed and sweaty, you coud tell how real it was. i think that’s what creates a good set.

You’ve had a huge couple of years, what do the next few hold?

like i as saying im putting out these small eps of music with short films and im also doig another big ep with interscope with a round of artist i really admire vocal wise, show wise really kind of going into more of the headlining space and doing some really cool shows in new york, san fransicip, la chicago and a lot of really call festiva opportunites in the fall and winter. it’s just going to be very exicint. i think its been a lot of my fans have been able to dive into a lot of music and im getting a lot more opportunities to play live and let peope see aht my vision is about.

We’re here at Phoenix Lights, keeping in theme, what are three things.. music, artists, movies, anything, that you think are out of this world right now?

I actually think there a really cool wve of jungle breakbeat music coming about and i think after seeing virtual self live it was cool seeing the artist hes been cosigning like raito and these undegound artists that are more junble breakbeat focuesd that prodigy and old chemical brothers used to set the tone with in the 90s and i think the music is kind of circulting back to that and i’m all for it. it’s something im stpked about just as. fan and an objective listener and i think its so cook ho music is starting to go back to more of a raw no rules format  even thoug electronic is pop at this point theres so many new avenues now to explore.