This past August, Insomniac dropped the much-anticipated lineup for one of the spookiest festivals in the country, Escape: Psycho Circus. The annual event will take place at the NOS Events Center in San Bernardino, CA on Friday, October 25th and Saturday, October 26th. 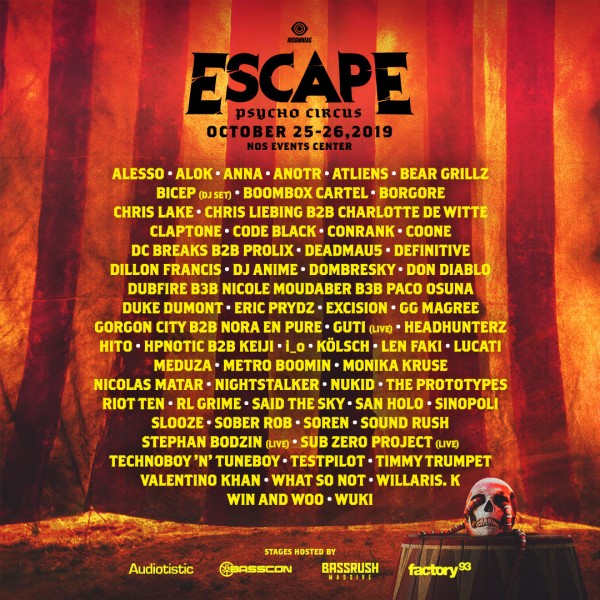 This year’s lineup features Alesso, Borgore, Chris Lake, Dillon Francis, Don Diablo, Duke Dumont, Eric Prydz, RL Grime, Valentino Khan, and many many more. Planning your itinerary for a festival with a lineup as stacked as this can sometimes be overwhelming, so read on for some guidance on sets you can’t miss at this year’s event.

Gorgon City has reached icon status during the past seven years they’ve been active. I’ve personally never had the chance to see them perform, making them high on my bucket list. I have seen Nora En Pure however, and I can say with confidence that it’s hard to beat the vibes of a live Nora En Pure set. Combining these two in a b2b set will result in pure magic that you might not get another chance to experience. DON’T MISS THIS ONE.

Australian musician, DJ, and producer Timmy Trumpet is known for putting on an entertaining show. I first saw him perform on a Tomorrowland live stream and was blown away at his skill on the trumpet while simultaneously keeping the crowd’s energy high from start to finish. He’s harder to come by here in the states, so don’t miss your chance to catch him live!

For those who have experienced an Excision set live, you already know he’s made for a Halloween festival like Escape, thanks to his trippy visuals and monstrous bass sound. This should be at the top of your list as far as priority goes.

Hopefully these must-see sets can help you narrow it down as you begin planning your itinerary for the event in the next few weeks. If you haven’t yet purchased tickets, head on over to the Escape: Psycho Circus website to grab them while they last. Two-day General Admission tickets start at $219.99 plus fees.