One of the biggest talents to come out of Arizona is Ghastly, a DJ/producer with an eclectic style and unmatchable energy on stage. Born David Lee Crow, Ghastly was raised on a goat farm down in Buckeye before moving to LA to launch his career. Now that he’s gained some traction, he’s relocated back to his home state, while he continues playing major venues and festivals across the globe. Arizona was lucky enough to get a Ghastly appearance at this year’s Goldrush festival as he played the Main Stage, Golden Gorge. I had the opportunity to sit down with the artist before his set and pick his brain on some of his recent endeavors. 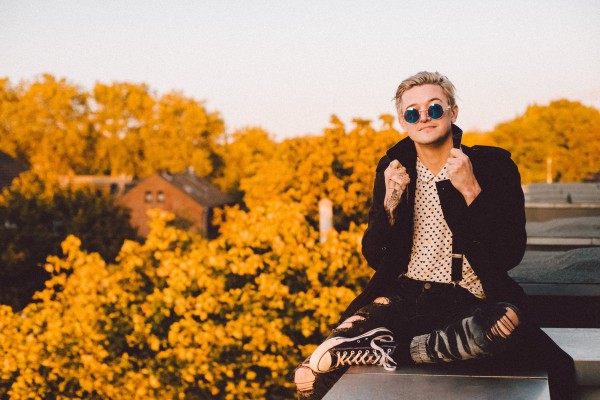 You’ve released two singles from your upcoming Haunted House album (love the name by the way). You made it clear you’re going to focus on House music for a little while. Can you tell us a little about the inspiration behind the new project?

Well, the project is still Ghastly…. so the House concept is more of like a Volume One Series. With the House series, what I’m able to do is introduce people to artists who I think have a really strong understanding of production and how to make good shit, and then also put out some of the weird random House songs that I’ve made.

It’s an outlet to get out my love of House cause I’ve always loved House but I also like big heavy fast bass music. So I wouldn’t necessarily call this a follow up to Mystifying Oracle. It’s more of like starting a new catalog that will continue throughout my career… Haunted House Volume 2, Haunted House Volume 3.. But my sets will always have a variety. Some of my most popular songs are big heavy bass tunes, like “We Might Fall,” “LSD,” “Psycho.” These are songs that a lot of people resonate with so it would be a shame to remove them, you know?

Is there anybody you’re hoping to collaborate with? Or anyone you’re currently collaborating with?

I mean there’s a lot of people I’d love to collaborate with, but the only problem with that is I feel like all of my best collaborations just happen naturally. It’ll just be “Yo” and I’ll send someone a song, like a little bounce, like “What do you think of this?” That’s usually how my favorite collaborations come out. Any time I’ve been like, “We NEED to collab together or we HAVE to then we’ll send an idea but then there are so many collab projects that go around with all artists that never see the light of day just cause you kinda fuck around with it and you’re like eh… It’s all about that, what do you call it, “synergy,” that you naturally come across.

To summarize it, I’d like to find myself collaborating naturally but if I did have to choose someone… dude I’d do a track with 6ix9ine right now, like straight through the phone while he’s on the other side, you know? *laughs* That would be epic.

Any hints on when the album will be released… or are you allowed to tell us?

Can’t say just yet cause we still have a few more singles we’re gonna drop out.

Alright that’s fair. So you’re an Arizona boy coming back to play the Main Stage at one of the biggest festivals right now in Arizona. What’s that like?

It’s amazing. I mean, coming back to the place where I used to only do goat farming and tattooing and things like that and to leave for 8-9 years, then after about 5 years of being in LA finally found my footing, and now I’ve moved back to Arizona and I’m playing the Main Stage. It’s a fucking honor you know? I’m surrounded by so many amazing people out here. I really love it. Absolutely pleased.

Well, you make us proud! Ok to wrap it up, we are using the Goldrush hashtag #canyoudigit this weekend. What are three things you really dig right now?

Um, suspenders. I like suspenders lately.  This new anime called Demon slayer. It’s really good. Very visually appealing. *“I love you too!” he shouts in response to someone across the room* … and I like people. I dig people.