For the rest of 2019, they continued teasing fans with new music during each live set, and eventually began releasing singles, including “Rescue” with Dion Timmer in May, “Stars Tonight” with DROELOE in June, and “Shake” with Jauz and “Feel So” with Funkin Matt in September.

Rumors began to spread about a possible collaboration album from the boys featuring all the new music they’ve been teasing throughout the year. It wasn’t until last week that the rumor was finally confirmed on social media along with another single from the upcoming album – “Sound Of The Underground” with Urbandawn.

The project will come in the form of a Deadbeats compilation album, entitled We Are Deadbeats – the fourth of its kind. Previous installments have including samplings from various artists on the Deadbeats label. 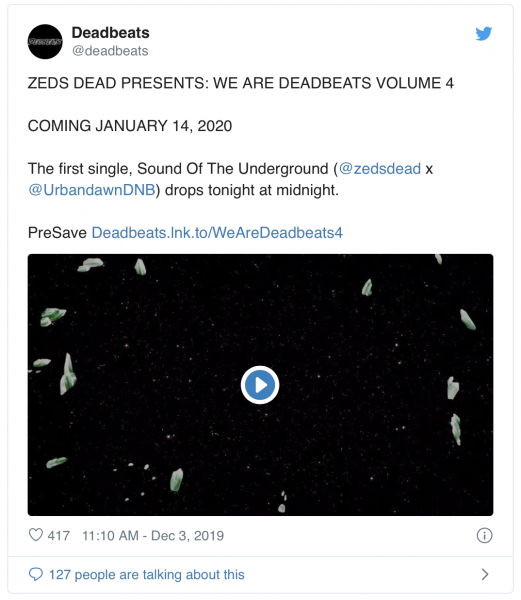 We Are Deadbeats Vol. 4 is currently set to release on January 14th and will feature highly anticipated collaborations like “After the Water” with Champagne Drip and “Ether” with Deathpact, as well as all their previously released collabs from the past year.

Don’t miss your chance to ring in the new year with Zeds Dead – they’ll be heading to Chandler for this year’s Decadence alongside Skrillex, Fisher, Griztronics, and more. Grab tickets here!