The following is not allowed into the venue:
NO Illegal Substances
NO Drugs or Drug Paraphenalia
NO Pets
NO Massagers
NO Laser Pens / Pointers
NO Eye Drops
NO Glass, Cans, Cups, or Coolers
NO Markers, Pens, or Spray Paint
NO Large Chains or Spiked Jewelry
NO Stickers or Flyers
NO Tents, Large Umbrellas, Chairs, or Blankets
NO Large Purses or Bags (Anything over 10×10 inches)
NO Open Cigarettes, Lipstick, Chapstick, or Tampons
NO Outside Food, Beverage, or Alcohol
NO Professional Camers – SLR or Detachable Lens
NO Video or Audio Recording Equipment
NO Knives, Firearms, Pepper Spray, Fireworks, or Weapons of Any Kind
NO Toy Weapons or Real Weapons of Any Kind
NO Open Sunscreen
NO Balloons, Balls, Frisbee, and / or Any Other Projectile
NO Native American Headdresses
The following is allowed into the venue:
OK Small bags, purses, and fanny packs
OK Empty water bottles, including reusable and disposable water bottles
OK Empty CamelBak-style water bladder systems
OK Fanny Packs
OK Non-professional cameras incl Go Pros
OK Cell phones
OK Lighters
OK Sealed: cigarette packages, tampons, packs of gum, and chapstick/lip gloss
OK Festival Totems
OK Glowing / Illuminated Costumes or Jewelry
OK Inflatables (deflated upon entry)
OK Flags / Banners or Handmade signs (no corporate or company-branded ones)
OK Sunglasses and hats
OK Sealed Liquid sunscreen and cosmetic products
OK Disposable E-cigs / Nicotine Vaporizer pens, but none with refillable chambers containing visible liquid
OK Guide dogs for people with disabilities and other service animals with current rabies certification


Festival Totem Guidelines:
-Decorated festival ‘totems’ are okay to bring so long as they meet the following guidelines
-NO TALLER THAN 6FT
-Posters/Boards attached to totems can be NO LARGER THAN 18”x24”
-Must be made from lightweight material (eg foam, PVC / no solid metal)
-PVC, Light Wood, Aluminium poles must be no thicker than 1″ diameter
-Decorated pool noodles work great for easy entrance through security
-Inflatables attached to totems must be deflated upon entry.
-Please note that anything deemed inappropriate, insensitive, or distasteful will NOT be admitted to the event.

I’m Dillon Francis, I’m from Los Angeles and I’m 24 years old. If you want to know more about me you can follow me @DILLONFRANCIS or go to Facebook or my Tumblr 666fuckingdie.tumblr.com. I probably won’t do an interview or photo shoot but here is an amazing … Read More

Space Jesus is the feeling you get when you travel through a wormhole in a fresh pair of Jordans. Currently residing in Boulder, CO, Jasha Tull was born in New Jersey and raised on hip hop. With his alarm set to NYC’s Hot 97 throughout … Read More 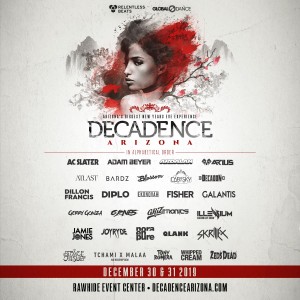