And on the 8th day God said,” Let there be Festivals.”

“Shambhala,” in ancient cultures, is synonymous with a secret kingdom hidden deep in the East where all its inhabitants are enlightened. But tucked inside the emerald forests of the Selkirk Mountains in Canada, you will find a modern take on this mystic, sacred utopia.

Shambhala Music Festival 2015 – Are We There Yet?

Shambhala began in 1998 as a grassroots gathering of 500 people on founder, Jimmy Bundschuh’s family farm, and has grown primarily by word‐of‐mouth thanks to its past patrons and artists. Last year, some 11,000 people made the trek to the unspoiled, majestic Salmo River Ranch (fondly called “The Farm”) ‐ tucked away within an evergreen forest beneath breath‐taking peaks ‐ to Canada’s premiere dance music festival, making Shambhala the largest city in British Columbia’s West Kootenay region for the weekend. 2014 headliner, Bassnectar, called last year “the best Shambhala ever”, while publications like VICE/Thump hailed it “a grand celebration of music, nature, creativity, art, love, and life … Shambhala reaches into your chest, pulls your soul out of its neat little bubble, and whispers words of encouragement for it to fly.”

Unlike other festivals, Shambhala’s six stages are each curated and independently run by their own respective stage directors; in most cases they are tastemakers in the Canadian music scene who have been returning to the festival for more than a decade. Each stage has its own theme: Pagoda, Shambhala’s main stage will feature some of the most beautiful, melodic and uplifting dance music in the world today, from the funkier side of bass music to the crunchier side of house.

The Village stage assembles the best in drum and bass, trap, glitch hop, hip hop and dubstep. This year’s Fractal Forest stage pays homage to old school hip‐hop and house, and is widely considered the fest’s funky haven. The Living Room stage is a range of the deepest of dub, zouk, bass, disco funk, house and Latin flavours. The Amphitheatre is perhaps the most eclectic of all the stages, running the gamut between urban beats and future bass music. The fest’s newest stage, The Grove, curates world bass music, deep dubstep, and garage. 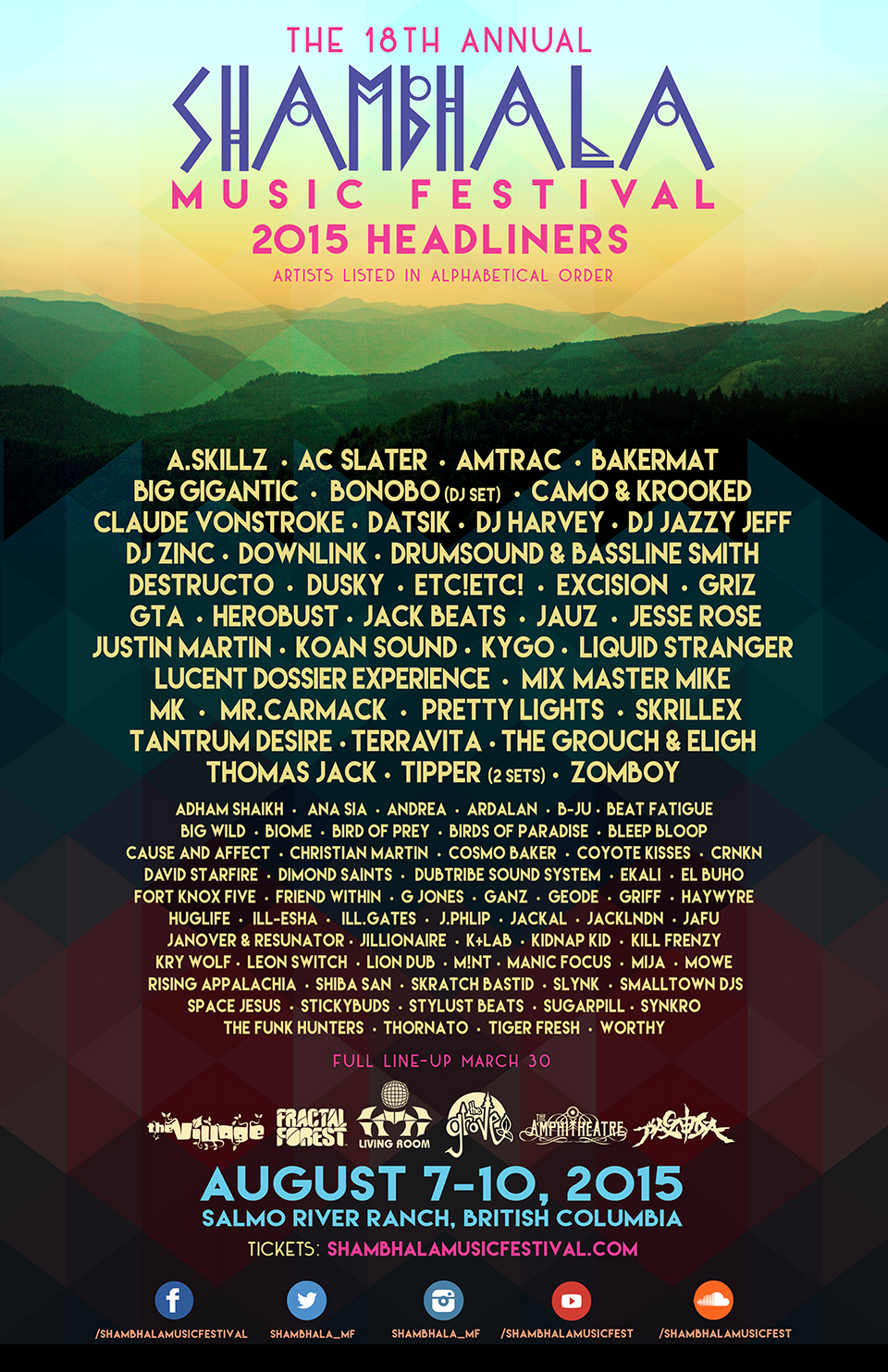 Shambhala Music Festival’s permanent home has evolved and scaled over the last 18 years, introducing inspiring transformations to its infrastructure to ensure a healthy, sustainable environment. Years in the making, energy for this year’s festival will be provided by a newly built underground conduit, replacing noisy, stinky generators and, greatly reducing the festival’s carbon footprint. Additionally, this is the first year the Farm will use its own newly built wastewater treatment plant to avoid trucking wastewater off the grounds. This translates into an increased supply of freshwater, a greater number of fill stations, and longer running showers. Additionally, to further its sustainability goals, the Farm has increased food production to feed its 700‐plus person crew each day plus guests.

Tickets are sold out for the entire weekend. So you better start searching Craigslist! Public transportation from Vancouver, BC; Calgary, AB; and Spokane, WA is available through Queen City Shuttle & Charters. Carpool options and additional travel information is available on the Shambhala website, ShambhalaMusicFestival.com.

If you believe in the religion of kindness, opening your heart to new experiences and friends, and the ability for people to come together and create an enlightened society to the tune of electronic music, then its no hidden secret that Shambhala Music Festival 2015 is your kind of place. Shambhalove!