HARD Day of the Dead Releases Massive Lineup for This Halloween

Halloween is already an insane holiday filled with choices: what costumes to wear, should you have just one more piece of candy, are we too old to trick-or-treat? Well, you’re about to be hit with an incredible amount of options because HARD Day of the Dead just dropped their massive lineup for the annual Day of the Dead music festival and now you’ll have to decide who you’re most excited to see!

HARD Events makes its return to Southern California’s Pomona Fairplex with its annual Day Of The Dead music festival. Taking place Saturday, October 31st and Sunday, November 1st, HARD Day of the Dead provides a stacked lineup, serving as its most stylistically diverse one yet! 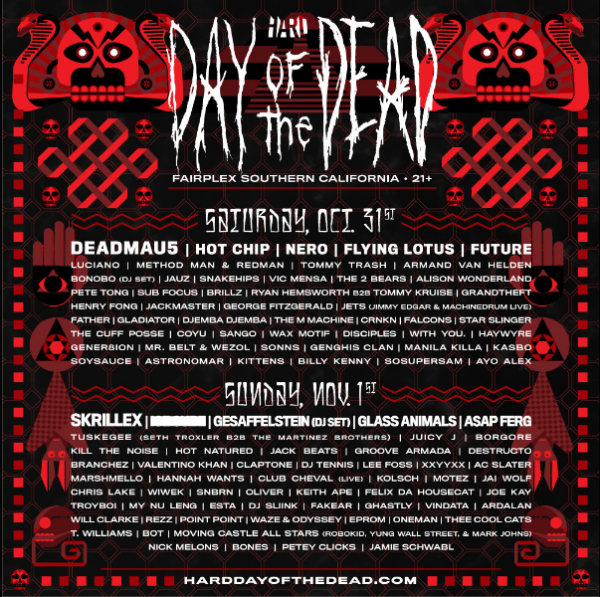 HARD Day of the Dead’s first night shows a packed lineup with headliners Future, Nero, and Hot Chip, but alongside them will be Deadmau5, one of the biggest names in dance music, and Los Angeles native, Flying Lotus, the experimental hip-hop genius. Leading up to the headlining acts on the first night of the festival will be dance music legend Pete Tong, the live show from Jimmy Edgar and Machinedrum, JETS, up-and-coming bass producer Billy Kenny, and, an unexpected performance from hip-hop bosses Method Man & Redman. And that’s just to name a few.

On Sunday night, HARD Day of the Dead will be closing out the weekend with a headlining DJ set from the ever-secretive Gesaffelstein, experimental band Glass Animals, A$AP Ferg, Skrillex, and a special performance from a mystery artist that has yet to be announced. The second night of HARD Day of the Dead can be spent relishing in some amazing acts such as a hot set from house veteran Felix Da Housecat, the powerful Hannah Wants, an unanticipated performance from Juicy J, a live set from Bromance’s Club Cheval, phenoms Groove Armada, and a special Tuskegee back to back set from Seth Troxler and The Martinez Brothers. The HARD Day of the Dead festival will also see debuts from Marshmello, REZZ, SNBRN, and Keith Ape.

Along with brilliant artists taking the stage, some branded stages will also be featured at the two-day event, including an All Gone Pete Tong stage, a stage dedicated to the OWSLA fam, and a Night Bass takeover stage courtesy of AC Slater.

Tickets for the event, which now requires attendees to be 21 years of age or older, are already on sale and can be purchased here!