During his Summer Set performance this past weekend, JAUZ announced that the long awaited collaboration between him and Skrillex is finally finished. Rumored to be entitled “Drunk Squad,” the track was played in its entirety to the lucky Summer Set music festival attendees for the first time. Prior to this, the track has been tested out in various forms by JAUZ as the final selection of his Ultra set as well as during his exceptional HARD Summer set earlier this month.

The first part of the track sounds like much of what we’ve heard previously from previews of the track; however, nearing the end, the track is boosted with the rattling bass that all us bassheads love. This third drop goes into a trembling trap breakdown alongside the central rhythm, bringing something new for the Shark Squad. As JAUZ continues making new music, he consistently proves again and again that “music has no boundaries” and sticks to his “no genres” mantra. Still unknown, the details of when the track will officially be released has yet to be announced, but we can assume it will be in the very near future due to JAUZ’s announcement of Skrillex and him finally finishing the track. MOST excitingly, Skrillex tweeted that they’ll be releasing the track for FREE in a couple days! #SharkSquad 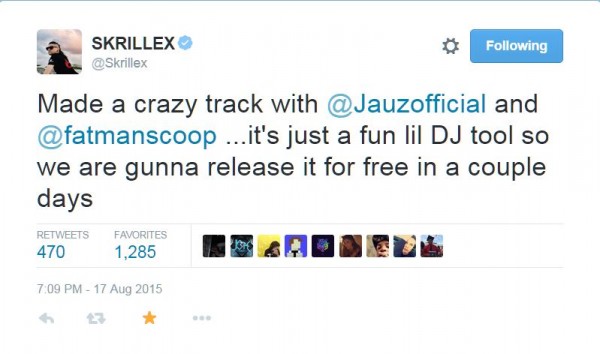