Wow – just WOW. HARD Summer 2015 was definitely one for the books. Being the biggest HARD Event to date (by far), HARD brought bigger stages, even more top-notch talent, and got us even more stoked for HARD Day of the Dead (especially after that EPIC possible lineup leaked yesterday morning – I still cannot get over how GOOD it is). This year at HARD Summer there were so many great artists playing that there is no way one could possibly see everyone on their schedule. The best part about that however, is no matter what stage you ended up at, there was top-notch talent, you were enjoying a great set, and the crowd vibes were on point. 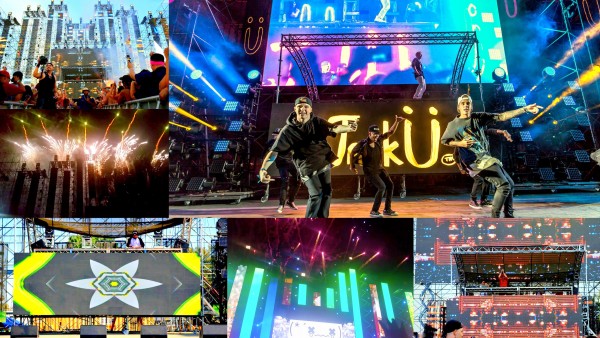 Skrillex and Diplo had drawn the biggest crowd yet to the mainstage as they performed a mind-blowing set as Jack Ü. Going from Sum 41’s “Fatlip” to “Turn Down For What” to “California (Know’s How To Party)” to “Lean On,” Jack Ü kept the crowd guessing on what they would drop next as they took the crowd for a ride. Not only was their performance the best time I had seen Jack Ü to date, but they also brought to the stage several special guests to perform their songs live. Aluna George came to the stage during DJ Snake’s “You Know You Like It” as well as for their Jack Ü collab, “To U.” During “Beats Knockin,” Fly Boi Keno performed with the duo, as CL did for “Dirty Vibe,” as well as 2 Chainz who hopped on stage for “Febreze.” As if that wasn’t enough, Justin Bieber was greeted by absolute screams as he came onstage to sing along live to “Where Are U Now.”

Jack Ü proved once again their incredible ability to put beats together in the most mind-melting way possible. One of the best moments of the festival was standing near the back of the endless crowd that had surrounded the HARD stage for their set, and looking around at everyone. No matter where people were standing in this crowd, whether they were at the front, in the beer garden, or on the very outskirts of the stage in the grass, everyone was dancing along to the same beat at the same time, feeling the same infectious energy that Jack Ü brought to the stage. Diplo had even said it was the biggest crowd Jack Ü has ever played for. Now imagine looking around this endless crowd as the free green 7-UP wristbands given out at the entrance of the green 7-UP stage are all lighting up, flickering lights throughout this entire massive crowd. Between the beauty of the lit up crowd, Skrillex singing during “Mind” as well as the other many special guests, and the stupefying set Jack U played, HARD Summer could not have ended in any better way.

This set was absolutely beautiful. Everything about it just went perfectly together; between the lights, fireworks and special effects, everything just complemented Porter Robinson’s LIVE set perfectly. I mean, this set had some fans in literal tears from the sheer beauty of it. Hearing and seeing his live set is like going through an emotional music journey, one that you don’t want to end because it was, dare I say, ‘flawless’? He played a lot of his own material, such as “Sad Machine” and “Sea of Voices” off of the Worlds album, as well as his beautiful remix to NERO’s “The Trill” that just makes one happy all the way down to the core. He finished his epic performance with his classic “Language” as fireworks shot off behind him and the entire crowd was left giddy with excitement.

He started out playing “Feel The Volume” and then the music said, “Get ready for something different,” as JAUZ began his EPIC genre-defying set. I had just seen JAUZ at the Marquee in Vegas the Thursday before EDC, but this set – THIS set was mind-blowing. Future house, dubstep, D&B, trap, you name it and it was in Sam Vogel’s HARD Summer set. He dropped several new tracks as well as the JAUZ & B-Sides brand new VIP of “Rock The Party” that went SO hard. Following this, he played the “Ignition Remix” and then switched it up again with some dubstep, heavy bass, and then trap again. He stayed true to his “no genres” mantra, kept the audience guessing what he’d play next, and had everyone hooked.

Feeling the energy from the crowd, he shared a special moment with everyone as he delivered an inspirational message explaining why playing at this festival is extra special for him. He was truly in the crowd just like every one of us a year ago, and to see him up on the stage was great affirmation to dream big because anything is possible.

DJ SNAKE played an energetic surprise set at 7:35pm day one of HARD Summer. When he came out it was still daylight, but he got the crowd going as the sun set and brought in the night sky. Speculating as to who this ‘DJ Question Mark’ may be must have gotten everyone stoked for the set and the crowd was absolutely LIT. Snake played alot of his own classics like “Lean On” and “You Know You Like It,” but also mixed it up with Rae Sremmurd’s “No Type” and flashed back to the 90’s with Oasis’ “Wonderwall.”

RL Grime definitely brought all the GRIME and more to HARD Summer. With gigantic colorful graphics surrounding him RL Grime charged through track after track of some mean music, including the drop in Nonsens remix of Banks’ “You Should Know Where I’m Coming From,” as well as his remix of Chief Keef’s “Love Sosa.” He also had the crowd going crazy with his own original material, including the forever great collab between him and What So Not entitled “Tell Me.” His enthusiasm from the stage crept through contagiously to the audience and trap arms were up.