In traditional HARD fashion, a hilarious new trailer for the upcoming HARD Day of the Dead event has been released. After releasing the Spoon U trailer for HARD Summer earlier this year, the music festival giant had to top themselves with their latest featuring a narrative following John Malkovuum, a vacuum version of John Malkovich, hunting down Tommy Trash with the goal of sucking him… Just check it out!

Featuring appearances from many of this years festival headliners including Skrillex, Destructo, AC Slater, Jauz, Marshmello, and Kill the Noise, this years trailer takes no prisoners. The horrifically comedic trailer was directed by Agata Alexander, who has come to have been known for her off-the-wall and completely random sense of humor.

This year possesses the most stylistically diverse line-up that the festival has had to date. Featuring a bit of something for everyone from the underground sound to hip-hop connoisseurs to mainstage fanatics and everything in between. Recently announced as a special guest for the festival is Hot Creations label head, Jaime Jones, who will be performing both solo and with his group, Hot Natured. Also included on the incredible line-up is back-2-back sets from Tuskagee (Seth Troxler and The Martinez Brothers), Ryan Hemsworth and Tommy Kruise, live sets from Club Cheval and Jets (Jimmy Edgar and Machinedrum), and live hip-hop performances from Method Man & Redman and Juicy J. Also expect stellar performances from some of the biggest names in music, Skrillex, deadmau5, Nero, Future, and Gesaffelstein. 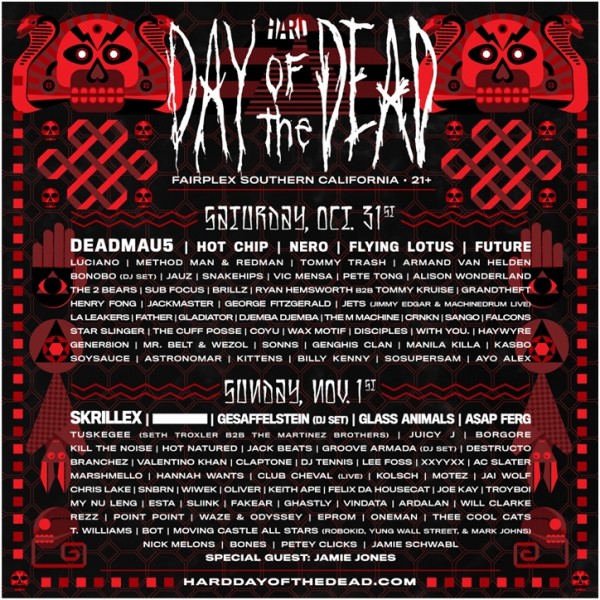 As for some of the other headliners, REZZ, who’s sound is often compared to that of Gesaffelstein, will be making her debut Day of the Dead appearance, which she claims to be her favorite festival. The mysterious masked producers Claptone and Marshmello will be showing off their coveted work. And finally, there is still a secret guest on the line-up who has yet to be announced. Workd on the block is that the blocked out name could include anyone from ZHU, who made his festival debut last year with Day of the Dead, Snoop Dogg, who was on a supposed leaked lineup from earlier this year, or even possibly a mini NWA reunion performance thanks to the success and hype surrounding the recently released film, Straight Outta Compton. I guess we will just have to wait and see.

HARD Day of the Dead comes to the Fairplex in Pamona, CA on Saturday, October 31st and concludes the following day on November 1st. You can purchase your tickets for the two-day extravaganza here!

Stay Connected with HARD Day of the Dead: