When it comes to electronic dance music, it kind of seem that there has been a bit of a Diplo takeover recently. I mean really, he’s an attractive successful DJ and producer on his own; and yet, he manages the time to headline pretty much every major festival with Skrillex as Jack U, owns his own record label Mad Decent that sets sail on an electronic music cruise every year after putting on some madly decent block parties, AND still stays true to his original project Major Lazer. I mean seriously, random white dude be EVERYWHERE.

With plans to roll out their fourth new album entitled Peace Is The Mission 2.0, the excitement builds as Diplo takes to Twitter to tell us that the new album is in the works, and he’s already got 5 tracks in master copies within his possession. The predecessor of this new album, Peace Is The Mission featured their platinum single “Leon On.” You may have heard of it; it was the number 1 most streamed song worldwide this past summer. I mean seriously, this guy must have the golden touch because everything he does is a success. 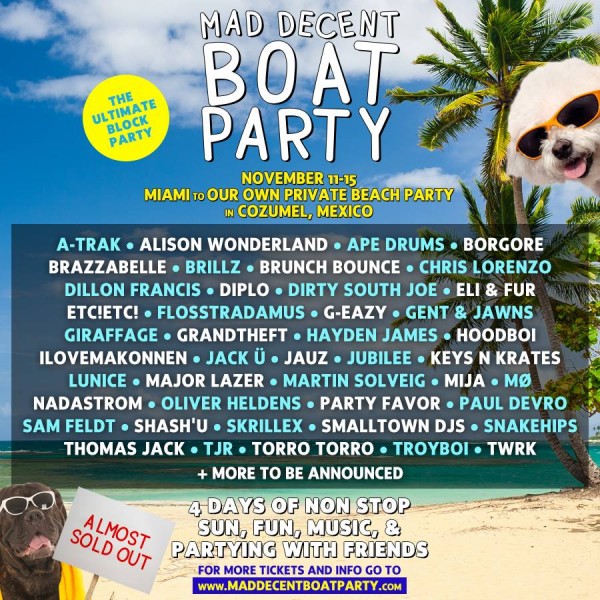 If you’re trying to party with Jauz, Floss, Skrillex, Brillz, Borgore, “Friends” of Diplo and the man himself, well too bad because there aren’t any tickets available. You can however join the waiting list of hopefuls trying to be the lucky ones. Test your luck to get on this boat party and view the complete lineup on the official website here: http://www.maddecentboatparty.com/