French DJ and producer, Michael Calfan, has been rising straight to the top ever since hitting it big with some huge support on his amazing and incredibly unique track “Prelude.” This track began a new chapter in the story of Mr. Calfan, who at one point, was thinking of quitting the electronic music production to pursue other endeavors. Thankfully, he decided to stick with it and now he’s playing enormous stages worldwide. 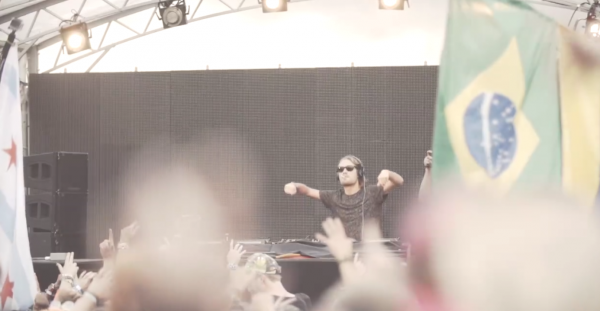 This year at TomorrowWorld, Calfan had the opportunity to play alongside names on the Potion stage like Watermät, Motez, Chris Malinchak, and The Magician. The Potion stage, curated by The Magician himself, was one of the new additions and highlights of the festival, as it was literally held on a floating boat in the middle of the TomorrowWorld pond. Michael Calfan’s Soul House rumbled the ship, as the buoyancy could be felt underneath your feet.

Before his set this year, Relentless Beats sat down with Michael Calfan to discuss upcoming music, to touch on each of his most popular tracks released thus far, and to talk briefly about the creativity that goes into developing music videos that audiences will want to watch. Take a look at the interview below!

So you’re performing TomorrowWorld for the first time today, are you excited?

Yes, of course! I’m super happy to be on the Potion stage, it’s very nice, there are a lot of DJs playing the stage that I really like. I feel that it is the only house-y stage so it’s pretty unique. So it’s very nice.

You’ve got your signature “Soul House” sound that you’ll be playing out today. Where does that come from? How did you develop this style?

Actually it came from the soul. *laughs* No, actually I started making music in 2007, basically I was more like a progressive house and I wanted to upgrade my style to something new because I was a bit bored doing always the same stuff and I wanted to find something more personal with my background of music and inspiration and everything. So that’s how “Prelude”, “Treasured Soul”, “Mercy” all came out, and I feel like it was just a natural upgrade.

Are we going to be hearing any more original Soul House tracks anytime soon?

Yeah I have a new track coming on Spinnin’ Records in the beginning of October for the ADE [Amsterdam Dance Event]. It is a very nice one, I’m super happy with it. I actually have another three or four tracks, original, that are ready, because I knew that after Treasured Soul I had to make a lot of new tracks to be ready because you have to tour a lot and it’s really difficult to make tracks on the road. So yeah, everything is ready.

Do you have a title for the track releasing next month?

A title? For the new one? I don’t know if I can tell it… No. It’s a secret. *laughs* Sometimes they start the promotion with the ID stuff, sometimes they do it because it helps… but yeah.

Definitely, I can understand that. Well, with your track “Mercy”, the music video was recently released and it is a very creative one. Do you have a lot of creative input with your music videos?

Yeah, actually we do all of the music videos with a guy named Michael, he’s actually supposed to be here, but I think he’s a bit late. In about 30 minutes he’s going to shoot the video of TomorrowWorld, but yeah, he’s a very nice and creative guy from Sweden and he did “Prelude” too. The thing is that I send him a demo, he has some ideas on it, and we do like a back and forth of ideas. We film it in Nice, south of France, in the street, and it was very cool.

We were trying to do something a bit different, a bit funny. Not too much like EDM.

I see that with a lot of the Spinnin’ videos they are very similar, and I was watching “Mercy” and thought to myself that this one is really a breath of fresh air.

Yeah, sometime artists don’t take care really of their videos. They say they want to make a video, so they send all of their stuff to a guy and he makes the video, but we are very careful about the image and everything and we want to take care of it. I love it. And it’s a lot of memories, you know? Maybe in 20 years I will show that to my kids and it will be very nice.

Let’s flashback to “Prelude”, it was an instant success. I remember the first time I heard it on Sirius XM and I remember thinking that it was a very unique song.

Yeah it’s funny because I feel that “Prelude” works a lot in USA, but not very much in Europe.

“Treasured Soul” was bigger in Europe, so yeah. Actually, for me “Prelude” is one of my favorite tracks to produce because it is very unique. When I made it, actually it’s a funny story, I will be honest with you, I was about to stop my name because I start another project on the side, more like an indie or more like a techno stuff, a bit alternative, and all of my friends were like, “yeah, you should do this stuff, it’s amazing.” And I was like, “yeah, but I can’t really play that,” because it was like very chill. So I said, maybe I should mix my older style with this newer style and that’s how I did “Prelude”.

Any final words for our readers out there?

Thank you for having me, thank you for the interview. I appreciate all of your guy’s support. Thank you for listening to my music. And, yeah, it’s very nice to make and share music with you guys, and hopefully I will see you soon at the gigs.

Hopefully sometime out in Arizona!

Michael Calfan just dropped his remix of the immensely popular Duke Dumont track, “Ocean Drive”, on October 2nd. I don’t believe that this was the track he was referring to in the interview, as he said it would be released via Spinnin’, however this remix is a chill-inducing and very groovy take on the track that has been dominating dancefloors worldwide. Take a look at the remix and keep an eye out for an original Soul House piece in the very near future.