Tommy Straete Lagergren, better known as Matoma, is a bright up-and-coming Norwegian producer and DJ making waves within the summery melodic tropical house genre that is now infiltrating electronic dance music after being brought to the masses by the likes of Kygo and Felix Jaehn. The talented and attractive 24-year-old has always had an ear for music, winning piano contests as a child, which resulted in him performing alongside respected Norwegian pianists, such as Havard Gimse and Leif Ove Andsnes. As he got older, his love of classical piano music waned, and he searched for ways to sharpen and enhance his musical talents in a different way by using electronics. Matoma transitioned from pianist to electronic producer as he started mixing on his laptop while studying at the Norwegian University of Science and Technology, from which he earned his bachelor’s degree in music production.

Matoma caught his big break after gaining popularity on SoundCloud and Spotify for his remix of Notorious B.I.G.’s “Old Thing Back,” which was later signed by Atlantic Records for an official release. He daringly has fused seemingly incomparable genres like tropical house and hip-hop together, but he does it well. Matoma has found sudden success and has had to quickly adjust to the rigors of touring after embarking on his Living The Dream Tour, which has traveled through South America, Europe and North America over just 3 months, commencing November 20th, 2015. He loves to compose electronic music with groovy basses, percussion and synths, and definitely knows how to work an audience. Directly after his amazing, crowd-pleasing set at CRSSD Festival in San Diego, I was able to catch the busy musician for a RB Exclusive Interview to talk about his music and how this entire experience has been for him. 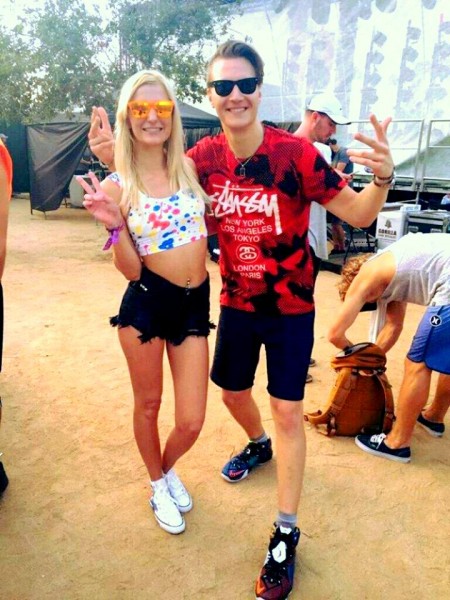 Writer Nicole Petriw with Matoma backstage for an interview after his set day 2 of CRSSD Fest on Sunday, October 11th at the Waterfront Park in San Diego, CA.

Nicole Petriw: How was the energy of the crowd during your set?

Matoma: Amazing, I have no words!

Nicole: Tell us about what you’ve been up to lately.

Matoma: We’ve been playing non-stop for 8 months, and we only have a few spare days in-between. If you don’t drink, you eat healthy, and you get the sleep that you need, like on the plane when you can, you get so much energy from the crowd and so you just keep going. I’ve been working on some new music and planning building myself as an artist.

Nicole: What’s been the most tasking part about touring non-stop?

Matoma: It has to be the logistics – like getting from one place to another. For example, if a flight gets delayed or you get hung up when you’re going through TSA or customs, then you’re upset because you tour, and you go from a place to a place every single day. So if you are delayed like 5 or 6 hours, then that will mess everything up, so always have back up plans. Plus, I have an amazing tour manager Stian, who’s also my best friend that takes care of it, and my booking agent Ferry, and my manager Andrew at Deckstar; they work really good together. We are like a big family!

Nicole: How do you deal with being homesick when you are away from your family and friends back home so often?

Matoma: I use FaceTime. My mom doesn’t have FaceTime, and so I bought myself like an international plan so that I can call back to Norway, but I always use FaceTime with my brother and dad.

Nicole: So you started out your musical journey playing the piano – how did you decide you wanted to start producing electronic dance music? Those are two completely different things.

Matoma: I was really feeling the Swede House that came during the 20th century… **Asks Stian his manager what the century is that he is referring to** 21st century, sorry I am a little tired I haven’t been sleeping for 56 hours. But, I listen to Axwell, Armin Van Buuren, Eric Prydz, and Carl Cox oldies, tech house, deep house, Swede house though – I really liked the Swede house because it has a lot of melody and the groove, but I wanted to learn to produce! So I bought myself a laptop when I was 16 and started to be basically like producing – it was really terrible. **we laugh** But I really liked it! Then I got into the army, but over 2 years ago now, I just figured out that music was actually my passion. So then I quit and applied for music school.

Nicole: Where at did you attend music school?

Matoma: At the biggest university in Norway. It’s the Norwegian University of Science and Technology in Trondheim, Norway – the city where I live back home. It’s 75,000 students so I have a bachelor’s degree in music production.

Nicole: What do you prefer doing: DJing in-front of a crowd or producing music and why?

Matoma: BOTH! Because you get so much inspiration and energy from the crowd and I really like just DJing! If it’s an arena or like here today with the guy before me that played like trap and really hard music; I’m more of that tropical guy, but at a festival I have to adapt my set. So I started out hard and then worked my way down with the beat to more tropical and my type of music. And that’s the challenge of being a DJ, like you always have to adapt your set, but today it worked out really good.

Nicole: I just saw you at Crescent Ballroom in Phoenix this same week as well, and during both shows you performed two different amazing sets. How is it different playing at a festival like this versus a smaller club show?

Matoma: Thank you! The one thing you have to remember when playing at a festival is that some of the crowd, they came to see me. But the majority of people come for the whole festival, so you have to adapt your music.

Nicole: When it comes to producing music, what sparked the idea of fusing together tropical house and classic hip-hop songs?

Matoma: I always listened to hip-hop, like old school hip-hop especially. My brother had introduced it to me when I was only 6-years-old. I didn’t understand the lyrics, but I really liked the beats and the tempo and the swing. So when I was sampling a saxophone and doing my own plug in so that I could play the saxophone on the keyboard, I had some nu-disco/tropical sketches on my computer and they seemed to mesh well together. I already had a taste of remixing classic hip-hop tracks, and The Notorious B.I.G has always been one of my biggest inspirations. After searching on the internet for a while I found an acapella folder with some of his tracks and that is how it all started.

Nicole: If you could headline any festival in the entire world, where would it be and why?

Matoma: Coachella – because I believe it is the most respected festival in the world.

Nicole: Who would be the dream to collaborate with?

Matoma: Well the dream, Notorious B.I.G. I guess I kind of already did (with “Old Thing Back”), but he’s passed so that’s impossible now. So I’d say rappers like Ice Cube and Snoop Dogg.

Nicole: What can we expect to see next from Matoma?

Matoma: I have a new album coming soon that I have been working on lately. I have been producing a lot, like crazy! My new song will be coming out (“Feeling Right” – check it out here below) and it combines tropical house, reggae and hip-hop.

Nicole: Do you have any words for the aspiring producers out there?

Matoma: I would say make music that makes you happy. It should make you feel good because then it will make other people feel good.