Since 2008, Electric Forest has been gaining momentum as one of the country’s “Must Attend” festivals. Rather than packing 100,000 to the infield of a race track or polo field, the forest draws a considerably smaller crowd focusing on the people, to bring together an amazing gathering of dance music fans. Deep inside Michigan’s National Forest, 35,000 forest family members unite for four days of magic.

EF has continuously grown each year and this year tickets sold out at a record of two weeks from the date they went on sale before any performers were even announced. Just yesterday thousands of eager attendees were given the initial lineup and unlike the usual social media blast with all the names located in one place, the organizers have trusted the task to it’s ticket holders.

EF2016’s Lineup Invitations, each revealing one or more artists on this summer’s eagerly awaited lineup, were mailed to a handful of randomly selected ticket-holders. With mail deliveries throughout the day, new artists were continually shared on social media with the hashtag #EF2016Reveal, creating waves of excitement and a level of interaction between a festival and it’s fans that has never been seen before.

Known for showcasing a mix of roots, rock and jam-style acts alongside some of dance music’s most talented performers, Electric Forest 2016 has again delivered a diverse lineup of over 100 established and emerging artists performing across 7 breathtaking stages. 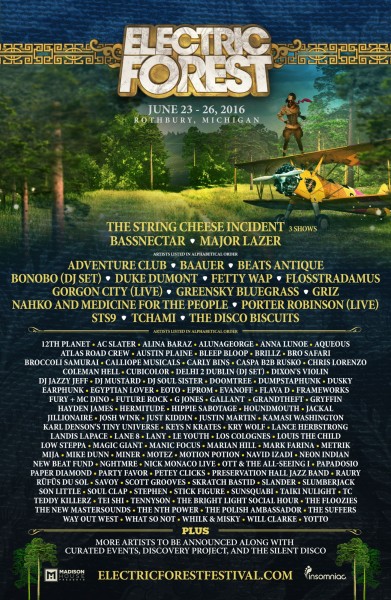 Rumor has it Electric Forest gets bigger and better each year. The festivals unique atmosphere makes it stand out among others and it has become a world of its own. Check out the full lineup and video series on the EF website and stay tuned for the remainder of the lineup!