B-Side Weekly: Madonna – “What It Feels Like for a Girl” (Above & Beyond Remix)

Welcome to the first edition of B-Side Weekly, where obscure album tracks, hard-to-find-remixes, and juicy bonus tracks are deconstructed and given a torch to light up songs you probably haven’t dug deep enough in an artist’s catalog to hear. Many of you readers out there probably have that one song that you feel never got any proper notice on an album from one of your favorite artists, or possibly a scarily-awesome song you heard in your local target. Yes folks, I am talking about that weird song you try to show your friends but every time you try to expose the greatness of your new drop, they block that fire track like they’re the fire department. While there will be showcases of DJs and artists both old and new, relevant or not, RB’s B-Side Weekly segment would also like to write about artists that you would have no idea crossed into electronic territory (most of the time not without the help of their friendly neighborhood DJ). 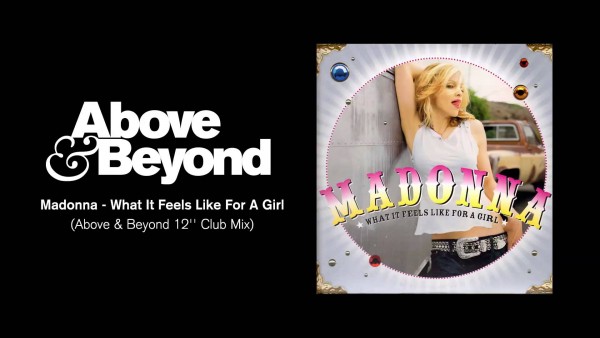 Today’s name is not to be thrown around lightly – Madonna is a name that stirs up controversial feelings for many, be it good publicity or bad. Most people under the age of 35 will remark about her irrelevance, while people over 35 seem to have forgotten she had made music after 1999. For anyone who has kept a close eye on pop music and pop culture itself, this is not the case. Madonna is a pop star who has managed to collect an impressive amount of awards and accolades for her work not only in pop music, but also some wary forays into film and other business adventures as well. What can be said about her music, is that the Queen herself has always put an emphasis on dance. While she isn’t a part of the collection of DJs and artists we immediately associate with, Madonna’s early work and production can be attributed to John “Jellybean” Benitez, a DJ and producer popular in the 80s in the genres of house and electrofunk, while also working with Michael Jackson, and Whitney Houston. Throughout the early 00s up until present day, DJs like Diplo, Paul Oakenfold, William Orbit, and Benny Benassi all have either remixed her work or have been responsible with putting material on her album.

Madonna – What It Feels Like For A Girl (Above & Beyond Remix)

The Above and Beyond remix was used for the music video, and managed to even chart higher on the Billboard Club charts than as a radio single. Instead of featuring the lyrics in the body of the song, the remix similarly beginning with the Charlotte Gainsbourg spoken-word intro sampled from the 1993 film, The Cement Garden. With Guy Ritchie at the direction helm, the violent Tarantino-esque shock value seems to have no blood or guts, but is carried into a trance by the thumping synth that is not so bass-y, but features progressive ambient sounds that are both a staple of its time, but extremely innovative. The Above and Beyond remix could as easily fit into today’s department store or sneak in on a slow night at the club. While it does possess a lot of innovation for its time, any song will manage to possess some sort of timestamp of the time it was released.

You should definitely encourage trying this lesser-known club thumper out. For while your friends may make fun of you for listening to a Madonna song, the Queen of Pop hears everything and will act swift with vengeance in the form of a dance routine.