RB’s Guide to Miami Music Week: Which Parties Will You Be Attending?

Miami Music Week, or Winter Music Conference, is one of the, if not the largest week in electronic music here in the United States. Everywhere you look in Downtown Miami or on South Beach, there is something going on. Whether it be at the Delano, LIV, Story, Nikki Beach, Space, or one of the many pools in Miami, you are sure to find something that appeals to your taste.

All of these club shows, pre-parties, after-parties, pool parties, beach parties, are all culminating to lead you to one thing and one thing only: Ultra Music Festival Miami.

With so much going on in a city so massive and densely populated for this weekend in March, we are here to help you organize your trip, and to find out what exactly is going on in Miami from March 15th – March 20th. With the help of MiamiMusicWeek.com, here is a list of parties taking place all week long.

Bringing Out the Big Guns

There are hundreds of events going on throughout the week in Miami, but there are a few that stand out among others to dedicated electronic music fans around the world. These are the shows that are looked forward to year in and year out, and they are the shows that have given Miami the reputation it has accumulated over the last several decades. Beginning on Thursday, March 17th, Miami breaks out the big guns, and treats us all to festival sized pre-parties and after-parties that are sure to make you consider leaving UMF a little early to catch!

Above and Beyond Miami 2016 (3/17) – The world renowned trance trio, Above and Beyond play but one show in Miami each year, which means that when it rolls around, the demand for a ticket is very high. This year, A&B will be taking over an abandon RC Cola Factory for a show that is guaranteed to wow all attendees. With special appearances from artists like Arty & Audien, Moon Boots & Jody Wisternoff, and Yoto & Grum, each playing B2B sets, A&B will be treating you to something unlike anything you’ve ever experienced. 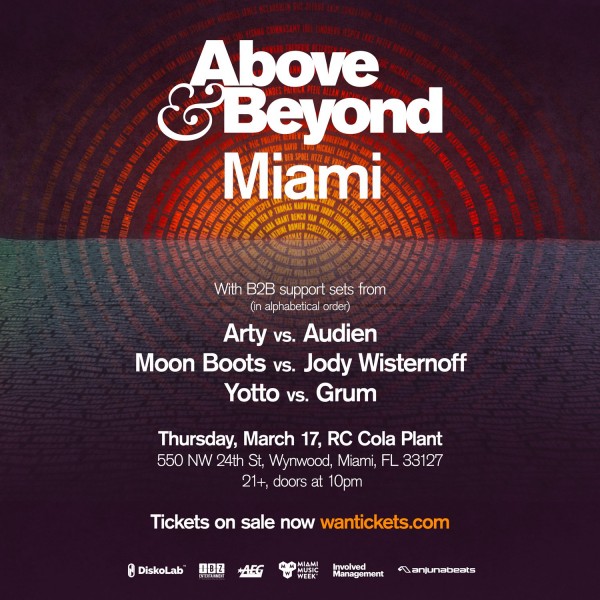 Paradise Miami ft Jamie Jones (3/17) – From Paradise label-head Jamie Jones comes Paradise Miami, which will be transforming the popular club show into a full on multi-artist secret Miami club-space extravaganza for all lovers of cool vibes and chill atmospheres. This time around, Paradise will feature sets from Jamie Jones, The Martinez Brothers, Skream, Steve Lawler, Lee Foss, Bob Moses, Matthew Dear, and many more. Taking place at Miami’s Mana Wynwood, get ready to take it deep for this 12-hour jam sesh. 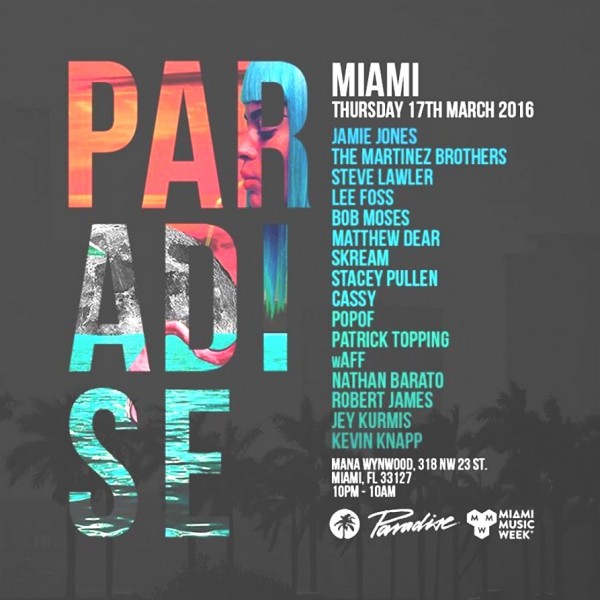 No Sugar Added (3/18 – 3/19) – NSA, or No Sugar Added is one of the biggest parties in Miami all weekend, being topped only by UMF. NSA ensues in the laidback and lush setting of Nikki Beach, one of South Beach’s hottest venues. Featuring 3 stages, NSA will be the ultimate destination for those of you without Ultra tickets during MMW. Day 1 features headlining sets from Deorro, Bass Jackers, Dyro, What So Not, and Mija, while day 2 boasts performances from Bingo Players, Benny Benassi, Sam Feldt, and Armand Van Helden. Among these DJs, NSA will house Cash Cash, Drezo, Makj, Kryder, Tigerlily, Rezz, Shiba San, Valentino Khan, Autograf, Bakermat, SNBRN, Tritonal, Amtrac, Destructo, Wax Motif, and many, many more. Special guests include Adventure Club and Dirty South! 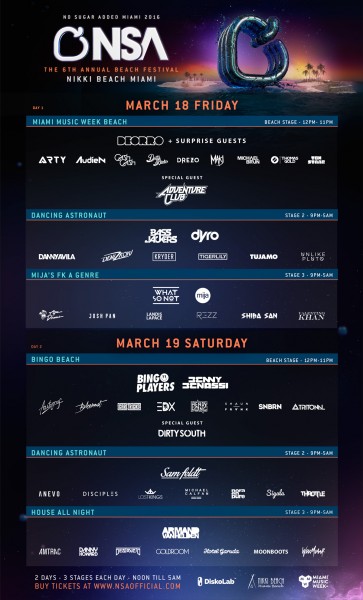 HARD Miami (3/18) –  HARD is no stranger to absolute mayhem-filled lineup’s and their annual Miami show is no different. This year, between two stages, we will see sets from both the heavy and the deep. Room 1 consists of heavy-hitters Boys Noize, Jauz, What So Not, Destructo, Wax Motif, Rezz, Drezo, and Wuki, while Room 2, sponsored by Night Bass, will see Justin Martin, Shiba San, AC Slater, Chris Lorenzo, Redlight, Landis Lapace, and Bones slaying the dancefloor. There will also be a very special performance from 2 Live Crew.

For everything else you may be interested in attending, we have compiled a list of events on each day during Miami Music Week. Check out Miami Music Week’s Official Website for all else MMW/WMC!

Tuesday in Miami is playing host to talents such as The Magician, Audien, Flux Pavilion, Ferry Corsten and Laidback Luke at venues like E11even, Delano, Icon, Story, and The Hangar!

After a relatively mellow Tuesday, things really begin to pick up the pace come Wednesday! The closer to the weekend we get, the bigger names and the higher volume of shows begin to trickle into town. Take a look at the highlights of Wednesday in Miami.

This is where things really start to get interesting. If you are only coming for Ultra, than that means you are likely flying in on Thursday night; therefore, this is the day where everyone is in town, but Ultra has not yet begun. Parties are massive, surprises are endless, and some very wild shit goes down on Thursday night in Miami, Ultra Eve. For example, a dirty bird B2B2B2B, A Eric Prydz x Cirez D show, and Above and Beyond playing in an abandoned RC Cola Factory. Yeah. Wild.

Sweat It Out ft Gorgon City, What So Not, Yolanda Be Cool, and more @ Shelbourne Hotel

Just because Ultra has begun, it doesn’t mean that the world around it stops. Just outside of the festival gates are loads of party seeking your attention. Among them are sets from Maceo Plex, HI-LO, Mad Decent, Martin Garrix, Attlas, Ghastly, Seth Troxler, and more!

Check out Saturday’s parties before, during and after Ultra! Making appearances are The Dirtybird Crew, Calvin Harris, Dada Life, Nicky Romero, and more!

Snailed It ft Snails @ The Hangar

As Miami music week closes, there are parties to take you right on up until you have to board your plane on Monday morning. Check out Borgore, Carnage, Mau5trap tour with a very special gue5t, Carl Cox’s Disco Funk, and Soul show, and many more!

There is many more where all of this came from. Head on over to Miami Music Week’s official website for even more details!

Also, you can download the Miami Music Week Apps here: