Relentless Beats Miami 2016: ASOT and Pendulum Dominated Ultra Day 3, But It Was One Group That I Will Walk Away Remembering

Well Ultra has come and gone, and oh boy, was it something else. We’ve already talked an extensive amount about what our time has been like here in Miami, Florida for this massive festival thus far. You can see our recaps of Day 1 and Day 2 here. But there is one last day to talk about, Day 3, a day that was filled with some of the most legendary moments in recent memory regarding the dance music scene. This was a day that included an epic reunion, a once in a lifetime occurrence, and just overall quality performances. 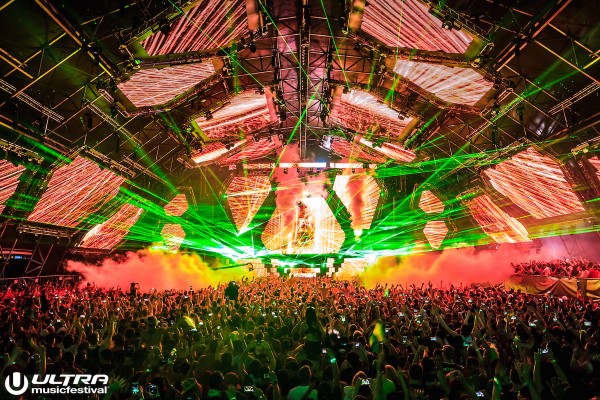 We had the chance to catch both Andrew Rayel and Aly & Fila, each of which was grand in their own way. Rayel, like always, took us on much more of an upbeat journey through the state of trance with his melodically vocalized tracks, and a keen sense of keeping the energy levels high. Serving as his own hype, Rayel never ceased the waves of cheering and bouncing. Even bringing out special guest Armin Van Buuren and Khoma, Andrew Rayel had no issues keeping us on our toes.

As for Aly & Fila (only one of which performed), they took us through a much more classic rendition of something we might find at the ASOT stage. With the mystical synths and relentlessly pounding bass of vintage trance music, Aly & Fila perfectly contrasted Rayel, while both remaining in the same realm of music for which they were representing.

But it was one set on the ASOT stage in particular that absolutely stole the day. I’m sure you can guess who it was. No, not Armin. Joel Zimmerman, better known as Deadmau5, took to the ASOT stage to deliver the first, and likely the only, Deadmau5 trance set. 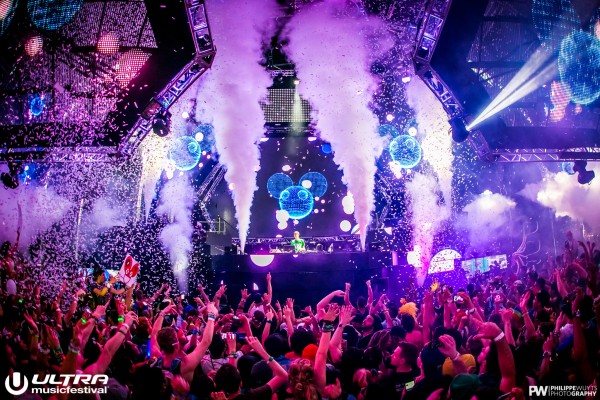 Joel glitched Ultra. Not only was the crowd at the stage too large for it to handle, actually forcing police to barricade a ramp leading to an upper viewing section of the stage because people literally could not get through to other stages safely, but they even dedicated more of the streaming time on UMF TV to Deadmau5 than originally anticipated because of the massive turnout.

Bookending the set with a few metal tracks, Slayer and Motorhead’s “Ace of Spades”, and sandwiching between an eclectic mix of house-inspired trance and some of the Mau5’s lesser known but equally as impressive tracks, Deadmau5 provided us with something we have never really heard from the notorious producer.

A complete listing of Deadmau5’s set can be seen here:

Aside from the ASOT stage, Ultra had many more surprises and massive sets. The Main Stage housed some of the bigger names of the day including Galantis, Zedd, and the epic B2B of Knife Party and Pendulum Returns. 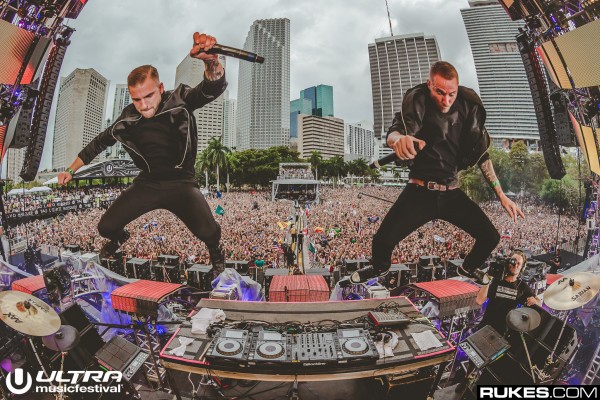 Galantis took us on a trip through dance music history with tracks like Sandstorm and many other house classics. But in addition to this, the Swedish based duo gave us a number of tracks off of their freshman album, Pharmacy, and even dropped a brand new track entitled “No Money”, which is highly reflective of how many of us feel coming home from a trip like this. How appropriate.

Zedd, the Grammy Award winning producer, treated us to many of the tracks that we have grown to love him for; those like “Spectrum”, “Clarity”, and “Find You”. The stellar performing artist also treated us to a bit of trap music, which caught me off guard, and a brand new track as well (this is beginning to feel like a trend). Zedd had a pretty grand turnout for his penultimate set, with attendees climbing high into the trees to catch a good view. And although Zedd was fantastic, nothing could prepare us for what would come next… 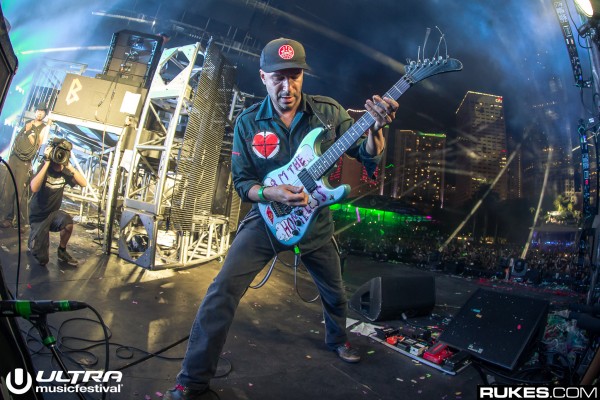 Before talking at all about the return of Pendulum, lets take a second to really appreciate how absolutely fulfilling every bit of that Knife Party set was. From their ballads off of Abandon Ship to the special treat of Tom Morello of Rage Against the Machine coming out to perform their new track together live, Ultra aided in pulling out all of the stops to make this Knife Party set one that no one will soon forget.

Now for Pendulum. Incredible. After a 4-year hiatus, the legendary electronic rock band made their live return with Ultra Miami. They kicked it off immediately following their remarkable Knife Party set, with a quick turn-around, Rob took to the mic, Gareth grabbed a guitar, and the rest of the band followed. Opening their show with the slow build of “The Island – Pt. I” and continuing with classics like “Witchcraft” and “Salt in the Wounds”, Pendulum came back strong and with a vengeance. 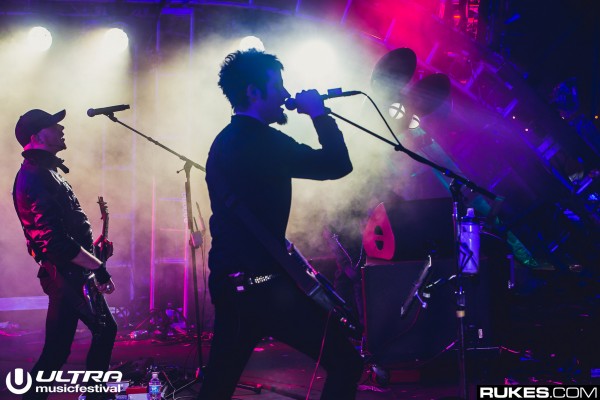 However, history was made when Pendulum brought out their very special guest a little over halfway through the set, Deadmau5, who aided in performing the Deadmau5/Rob Swire masterpiece, “Ghosts N Stuff” live for the very first time ever. For a third performance at the festival this weekend, I would say that this was the most epic of all appearances that the Mau5 could have made.

Following, Pendulum closed out the night with a brilliant live performance of the Knife Party track, “Begin Again.” This would be the first time that the track had ever been played in it’s entirety and the first time it’s been performed live as well. Immediately following their fond farewell, Ultra flashed the dates for next year’s event on the screen: March 24, 25, 26, 2017. 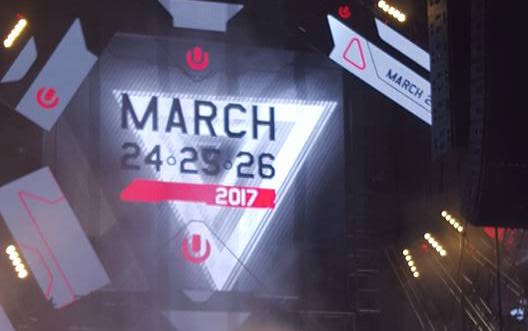 So there it is… ASOT and Pendulum dominated day 3 and we have our dates for the next Ultra. But before you close this window and move on to the next bit of news I want to highlight one last performance.

I’d have loved to give the act of the night to this band here, but it was just impossible to deny the sheer magnificence of a set like that Knife Party/Pendulum madness. However, had this been an Ultra where say Hardwell or David Guetta were closing, I’d easily, hands-down, say that the set of the night went to the other electronic rock group of the night, Destroid!

Never again will I miss a Destroid show if I have the opportunity to catch it. I didn’t expect this, but I’m glad I went to the live stage. What was originally planned as a quick 10 minute “let see what this is like” type of stop, turned into a good 30 to 45 minutes of rocking out and head-banging to some hardcore bass music. Consisting of heavy-hitting Dubstep artists Excision and Dowlink, with KJ Sawka on drums, Destroid knows no boundaries regarding the word deafening. 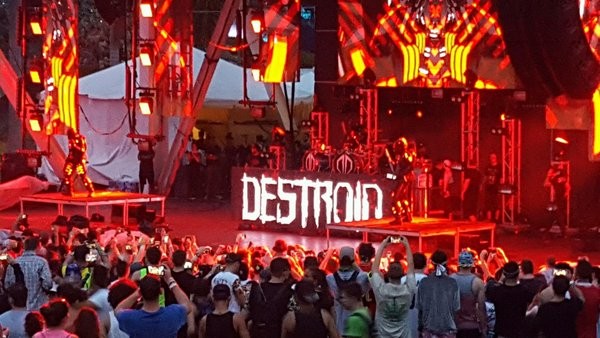 Their set was pure unadulterated sex. Despite a few tech slip-ups here and there due to rain, Destroid destroyed. And like I said, I can’t hand it the award for set of the night, but I can tell you that it was my biggest surprise and certainly what I will walk away remembering most about day 3. When you can keep a crowd going, despite a lack of sound and lights, free styling to keep up morale, you know you’ve got some talent on your hands. Not to mention, KJ Sawka with the drum solo was just about one of the coolest things I saw this weekend.

Obviously I couldn’t catch everything this weekend, but what I did was certainly worth a trip to Miami. UMF killed it as usual and if you ever… I mean EVER, get the chance to go… do it. You will never experience anything on this level of entertainment, live or otherwise, this side of the Atlantic or Pacific. Next year is still a ways off, but I can guarantee you, every bit of news regarding next year’s installment I will be eagerly awaiting. How it can top 2016? Surprise me Ultra.