Branchez is a rare talent. Few producers are able to create such a diverse array of electronic, pop, R&B and hip-hop influenced records. His first EP, 222, is no different. Co-written/produced by college friend turned studio collaborator Charlie Klarsfeld, the four track offering delivers a deeper, sexier vibe compared to his previously released singles. 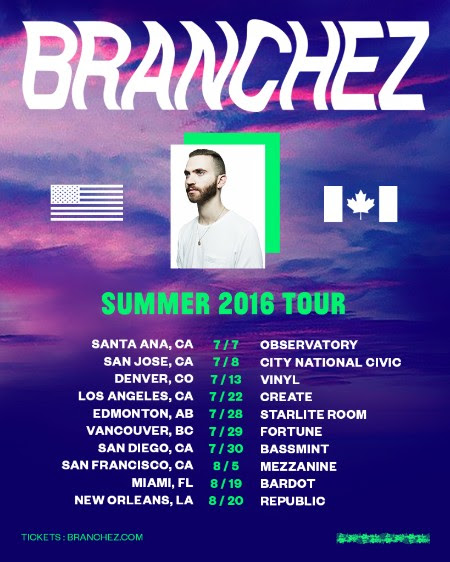 The first song “Dreamer” features catchy synth rhythms and a smooth bass line. “IDRK” pulls you in with a slow dark build then hits you with a barrage of distorted vocals and uplifting changes. “Don’t Matter” has punchy kicks and smooth melodies that meld perfectly with the playful high pitched vocal sample. Rounding out the selection is “Next.” Singer Janine and the Mixtape’s vocal stylings make the song stand-out while capturing the romantic essence of the EP as a whole. The EP is available now via all platforms.

One of New York City’s finest, Branchez broke onto the scene with the singles “Treat You Right” and “Shake” (featured in Skrillex’s Essential Mix).  Soon after, his bootleg of Rihanna’s “Stay” received international acclaim.  Propelled by his sudden success, Branchez proceeded to release a handful of notable remixes, highlighted by his tasteful reworks of What So Not’s “High You Are,” Wet’s “Don’t Wanna Be Your Girl” and Alesso’s “Heroes (We Could Be).”  He has since joined major acts such as Zeds Dead, RL Grime and Skrillex on tour, bringing an energetic, infectious stage presence and distinctly varied mix of sounds with him to cities around the world.  With his star rising and now a full EP under his belt, look out for Branchez to have a huge second half of 2016.