We have kept you updated with announcements of speakers who will be sharing their wisdom come June 14th through June 16th at EDMbiz Conference & Expo in Las Vegas including industry names like Liz Garard, Bob Lefsetz, Jauz, Marshmello, Moby, Armin Van Buuren, Insomniac founder/CEO Pasquale Rotella, and many more. Well, now we are ready to share with you the full programming for this years installment of the electronic music conference.

Starting off the news with the fact that audience participation is welcomed and highly encouraged, this year’s programming schedule is sure to be an interactive and engaging one. 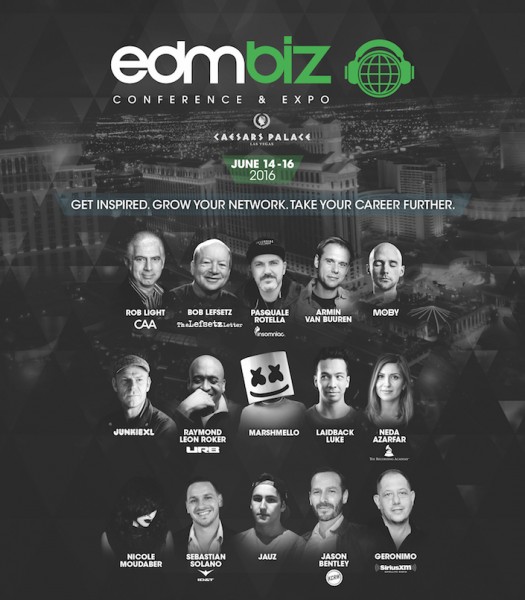 Among this year’s programming is the Beyond the Boys Club panel which will feature Nap Girls Founder Liz Garard, and will focus on spreading gender equality throughout the industry. Among panel members are techno legend, Nicole Moudaber; Sarah Polonsky, the US editor at DJ Magazine; as well as many other prominent women in electronic music.

In addition, we will see a panel focusing on creating The Next Big DJ through the eyes of Red Light Management and its artists. Wise words will be shared from the mouth of Moe Shalizi, manager of artists like Jauz, Marshmello, and Ookay, who will also be in attendance. These are artists who rose in prominence very quickly and have created a lasting imprint through different strategies very effectively, so it should be very interesting to see what this group of people has to say on the matter.

And for you Trance fans out there, a panel has been curated just for you: Resurgence of Trance. The resurfacing and the popularity of this long-respected genre will be discussed by legendary artists like Paul Oakenfold, Markus Schulz, and other industry representatives like Twenty4seven’s Dimitri De Wit and David Lewis Productions’ Tim Smeets.

Many other panels will be present at this year’s event, but at the core of EDMbiz is it’s keynote speakers, this year’s consisting of Insomniac’s Pasquale Rotella; Trance mega-star, Armin Van Buuren; Industry analyst, Bob Lefsetz; and Moby, who will be discussing his latest project Porcelain: A Memoir.

An interesting aspect to mention is that this year’s artist panel has yet to be announced.

Each morning attendees will have the option to engage in a revitalizing yoga session, as well as a midday networking happy hour in which attendees can interact with each other and business professionals to talk about the day’s conferences. And for those of you looking to get into the industry yourself, there will be a mentorship session hosted by Little Empire Music & Skylight which will serve to empower and educate young hopefuls. Among mentors is Galantis & Miike Snow’s Christian Karlsson.

The full programming can be found below:

o   Moderator: to be announced

o   More to be announced

§  ADS, FADS, AND THE FUTURE OF RADIO

§  AFTER THE DROP: THE STATE OF DANCE MUSIC

§  ANTICIPATION, AUDIENCE, AND NOT BEING AUSTRALIAN

§  BEYOND THE BOYS’ CLUB: WHAT’S NEXT FOR WOMEN IN DANCE MUSIC

§  BUILDING THE NEXT BIG DJ

§  DRUGS IN DANCE MUSIC: IT’S TIME FOR THE INDUSTRY TO ACT

o   Kevin Kerslake, Filmmaker/Photographer, Director – “As I AM”

§  LITTLE EMPIRE AND SKYLIGHT: PROMOTING THE FUTURE THROUGH MENTORSHIP

o   More to be announced

o   Artists to be announced

EDMbiz will be held from June 14th – June 16th. Tickets can be purchased here. For more information head over to EDMbiz’s official website.