Based on this list you might think that we here at RB spent our entirety at the BassPod stage at EDC20, but I think that this is just a testament to the talent, the stage production, and the ridiculous amount of fire that graced the hard-hitting edition of this year’s trap and dubstep showcase.

So with that said, BassPod hosted an immaculate show this year, but the other stages were no exception. Although 3 of our 5 favorite sets come from BassPod, every stage this year played its role in creating a phenomenal experience for all of the headliners out there. Whether you walked into the raceway to see Zedd’s set at CosmicMeadow or bared witness to Hardwell’s incredible KinteticTemple performance, EDC20 was one for the record books.

This was my first time catching Flux Pavilion in action, but I am sure most of you have done so before. May I just say that he slaughtered every one of my expectations, and I wasn’t even in the bulk of the crowd. Sitting in the field surrounding CosmicMeadow, feeling the vibrations from the bass in every blade of grass, Flux Pavilion delivered a stunning presentation of fresh dubstep and bass classics, even closing his set with his infamous remix of DJ Fresh’s “Gold Dust.”

These guys have been on my list of artists to catch for a very long time. I have always been well aware of the clout that Caspa and Rusko have held in the industry and the mark that they have left on dubstep, so when I saw that they were playing BassPod this year I knew I had to clear some space in my schedule. With that, when two artists with as illustrious of careers as solo artists as they both have combine forces, it is something truly special to behold. This back to back has been happening for some time now, and might I just say, I strongly hope that it continues.

One of two sets on the list not stemming from the BassPod stage, NeonGarden held many close seconds for myself, but one that surpassed all others was a remarkably well-crafted set from Germany’s Lane 8. I found myself getting lost in the music with Lane 8. The vibes were all over the place as he seamlessly transitioned from music that had me tapping my foot and bobbing my head to music that had my whole body moving freely through the space around me. This was an experience that is truly difficult to describe, but as best as I can say it, Lane 8 invited us into an experience, not just a one-off set. 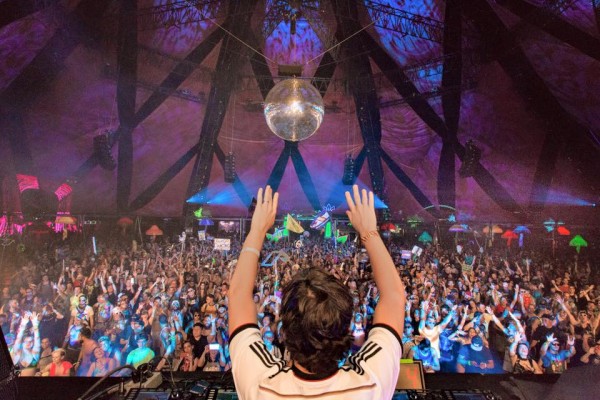 Tyler Marenyi, or NGHTMRE, as the world is familiar with him, is all the hype right now. The young producer has been dropping original material left and right, appearing on guest mixes all over the radio-sphere, gracing the line-ups of the country’s and the world’s biggest festivals, and staying humble while doing so. Not only did this set absolutely dominate the BassPod, it also showed off a lot of what Marenyi has coming as far as his music goes and who he is as a person. With special appearances from Flux Pavilion (debuting a new collaboration), Slander, and even NGHTMRE’s dad in celebration of Father’s Day, the future is looking bright for this incredibly talented producer.

Like I mentioned before with the Caspa b2b Rusko set, when great minds and great talents come together, it is not something to miss. This time however, there was the insight and the contribution of a third member, and in this situation less definitely is not more. Although this isn’t the first time Doctor P, Funtcase, and Cookie Monsta have played together (and it won’t be the last), this was definitely the largest scaled production it has happen with. The heaviness was in full force, pulling back no stops, and banging out BassPod’s speakers to their fullest potential, these three producers created an awe-inspiring mix that will forever be remembered by us here at RB… especially given we have Cookie Monsta coming to town next month 😉

What do you think? What sets caught your attention at EDC20? Maybe you saw something we missed… Let us know! In the meantime get your tickets to Cookie Monsta at The Pressroom who will be playing alongside Noisia and Dieselboy on July 15th!