Hey man, how have you been? I know breakups can be hard, but sometimes things are for the better right? I mean, yeah, genres come and go, but sometimes we all have feelings for those people who haven’t been in our lives lately as much as they should. Maybe it’s time to hit up that guy/chick you used to get down with every weekend; remember Trance? We do.

This November, that panging heartbreak in your life when they left will be mended over with another year of one of the biggest Trance-dedicated events in the red, white and blue. After Insomniac revealed the official lineup for the Dreamstate SoCal, which is making its second-year entrance as an event dedicated to the love, creation, and experience of trance music, the world hasn’t been the same when dozens of artists from the genre come together.

Trap in the EDM world may have taken everyone’s attention this summer with rappers of both underground and more famous origins being paired up with hi hats and sub bass, but what about Trap House’s cousin trance? Insane event producer, Insomniac will be bringing back Dreamstate SoCal November 25th and 26th to bring sixty of the best trance-influenced artists to the floor and show everyone which subgenre is still boss.
Although trance has made its way into the mainstream and has meshed into what we now call EDM, artists like legendary Paul Oakenfold, Infected Mushroom doing a “Psytrance” DJ set, Gareth Emery, Paul van Dyk, just for starters. Don’t worry, you won’t be trapped at one stage either: Dreamstate SoCal is going to feature three stages to satiate your trance needs, whether you want to be chillin’ with Binary Finary, or maybe Vini Vici’s “Future Classics” was more up your alley before you showed up. 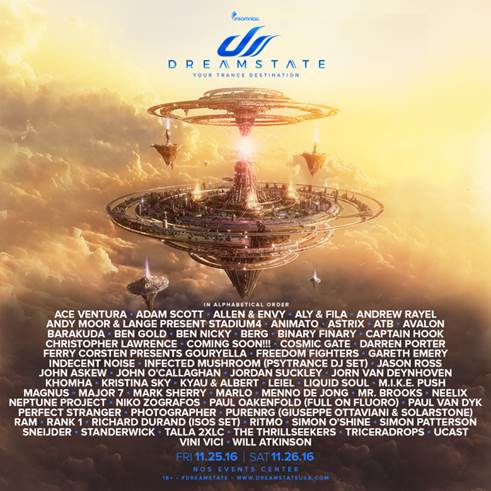 As mentioned above, it’s not secret that trance has found its way back into the mainstream and almost integrated itself into the bigger “umbrella” of EDM. According to one of last year’s reviews on YourEDM.com, ” [the festival] was a seriously refreshing reminder that the real stuff is still out there; kudos to Insomniac for reviving a seemingly dead/dying genre.” Although trance has taken a backseat in recent months, it would be ludicrous to say that the genre is “dying” any sort of death. What you will witness in November is a layout of impressive production elements, insane visuals, and a sure-shot revival of what made so many people experience FOMO, or the fear of missing out.

This year’s event with newcomers as well as genre veterans will bask in the ambiance and truly feel like home again in a world that is currently dominated by Trap and other genres of the moment. Yeah, maybe you haven’t hit up your girl/guy Trance in a long time; maybe you even spent a few months with another genre (okay, Trap was a dime-piece, but let’s not talk about that one night with Electro Swing a few years ago — bad idea from the start), but baby, you know Trance is always lurking in places you wouldn’t find them, and you know they are ALWAYS going to be around in some shape or form. Don’t worry baby, Trance is keeping you safe this time, no matter what Trap has to say about it.