There’s new talent coming about, and he is stampeding into the scene to leave his footprint. Wooli, situated in Upstate, Antarctica, has just been predicted to have an epic 2017 by none other than his animal companion, Bear Grillz. In addition, Excision recently highlighted Wooli’s unreleased track, ‘Wave It Up’ featuring Clinton Sly in his 2016 Shambhala mix. 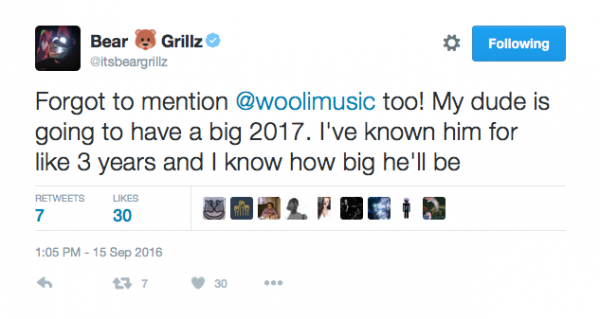 Meanwhile, it is apparent that Dirt Monkey and Harvey J go off on their collab ‘Super Saiyan.’ It was up to the Wooli mammoth to effectively turn its sound around. With the original having more bass elements, the remix is just as satisfying. Harvey J’s vocals are kept intact, while Dirt Monkey’s bass line gets transformed into a more melodic form.

So if you enjoy bass music, Wooli is for you. If you don’t, Wooli is also for you. Respectively, the elephant transposes bass tracks other than ‘Super Saiyan’ to have more of an uplifting sound. His Soundcloud consists of music from flexible genres and crosses the lines of those boundaries to create his own exclusive elements.

In October, Wooli will be contributing to Dirt Monkey’s Chroma tour. Unfortunately, they will only be heading to Texas, Colorado, and Kansas. For 2017, scan each festival lineup you see, for you may find Wooli featured among the rest of the scene’s most proficient producers.