Big Makk, whose real name is Samisoni, and two others were pronounced deceased at the scene in Seminole County, Fla. Their Dodge Charger ran into a tree causing it to combust.

Big Makk had a heavy impact on the electronic dance world, especially in Orlando where he hosted a popular “Shake ‘n’ Bass” dance party every Sunday night. Spinning hip-hop from the young age of 13, the DJ was thrilled to “finally” be scheduled to play Electric Daisy Carnival in Orlando come November. 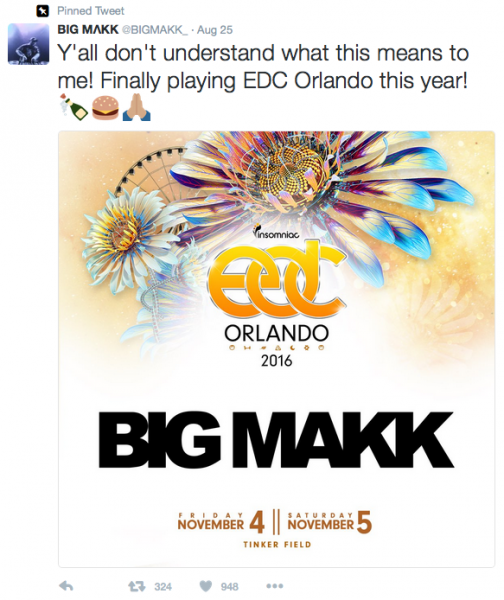 He worked with elite labels- like Dim Mak and Mad Decent- to produce bangers featuring hip-hop and heavy trap, like his last track, ‘DROP TOP,” that was released just one month ago. He was an integral force in moombahton (a sub-genre combination of reggaeton and house) as he was also a part of a trio called The Moombah Mafia that transformed the genre and pushed it to explode in Orlando.

Although there won’t be anymore brilliant bangers from Big Makk himself, he has already inspired a track by his close friend, Ookay. The “Buck” producer was so shaken by the larger-than-life DJ’s passing that within a few hours of hearing the news, he whipped up a tribute song entitled “Back Again,” that he later tweeted will be included in his upcoming album. The mellow beat is complemented by powerful lyrics that begin with the phrase “I can’t believe that it had to be this way and I didn’t even get to say good bye.”

The track received overwhelming praise in SoundCloud comments and on Twitter. Ookay even received a message from Samisoni’s grandmother that he tweeted:

The EDM community has been reminiscing on their memories with Big Makk, and many artists, as well as fans, have contributed to the fundraising campaign to assist his family with the funeral charges. The page, created by friend Michael Lambie, has already exceeded its goal of $20,000 with large donations from Marshmello, Dillon Francis and 4B. To donate, click here.

On behalf of Relentless Beats, our sincere condolences go out to all of Samisoni’s family, friends and fans.