Mad Decent Block Party began as just what the name entails.. a block party. When it came about in 2008, it was open to the entire neighborhood. You brought your friends, your kids, and even your dog! It originated in Philadelphia and spread to other cities a few years later. Each year the event continues to grow at an accelerated rate.

Each city gets only a handful of artists off of the entire showcase of the event throughout the United States. Mad Decent Block Party became reputable in Phoenix in 2014, and featured eight of the most recognized producers off of the entire MDBP lineup. Big Gigantic, Cashmere Cat, Dillon Francis, Diplo, Flosstradamus, Strfkr, Thurz, and Zeds Dead took over Rawhide, and the tradition began. 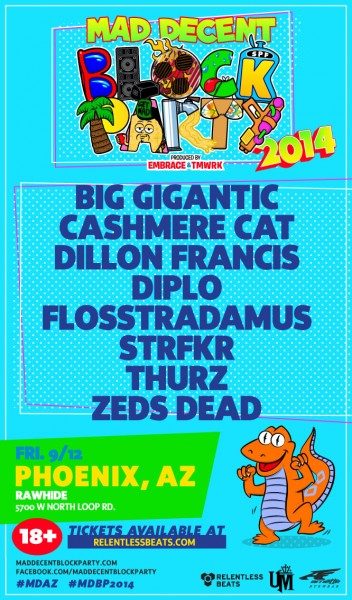 So many people wanted to get in to experience such an event like no other in the valley. With thousands of people trying to come into the event, getting everyone settled was a challenge.

The line process is still being perfected and will only continue to improve as will everything else. With more bathrooms, bartenders, and food vendors, the event surely grew as the amount of people attending did. 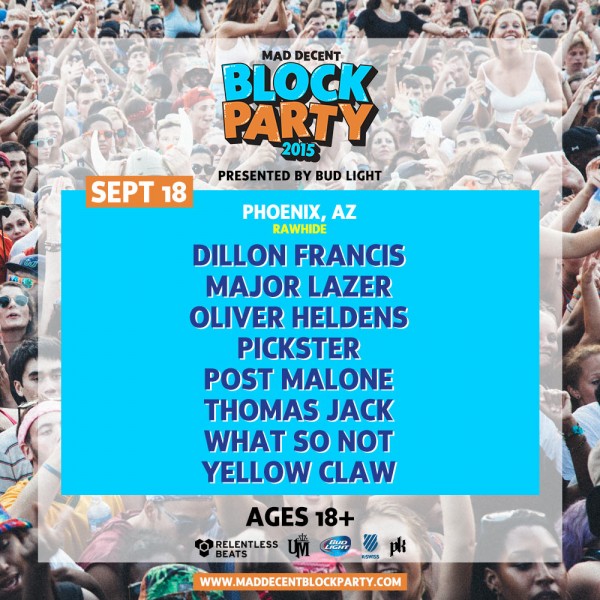 Year two gained a bit more traction than year one. The multiple teams coming in to help host the event were still attempting to be on the same page. Between teams from Relentless Beats, Universatile Music, Mad Decent, and Rawhide, they managed to progress the event further into establishment. It wasn’t until year three that the Relentless Rangers were brought on to verify that all attendees have a safe and sound experience.

Just last weekend, Phoenix welcomed Mad Decent back for it’s third year. With artists performing on both Friday and Saturday, it was one of two in the country that exceeded the normal duration of one day. Diplo, Dada Life, RL Grime, Tchami, Jackal, Baauer, and even Lil’ Dicky slid through to play a set.

Every year of its existence, Phoenix has brought one of the largest attendance rates of the tour. It’s no wonder Diplo brings us what you could consider to be the best lineup. A standard Mad Decent consist of 6-7 artists. This year Phoenix hosted 15! Previously, we were still granted with more artists than usual, but the lineup has doubled over one year! Future Phoenix MDBP events will continue to surpass the expectations.

Music began each night as the sun fell behind the mountains, just beyond the stage. The beauty of all of Arizona’s electronic lovers united in the desert was beyond what you could imagine. The Relentless Rangers and security did their part to make sure attendees were safe, and the free water station was absolutely necessary with the dry Arizona air.

Overall, it was an obvious triumph. The event will only continue to grow, for the desert is one of its favorite spots. If you’re local, and have not checked out this event, keep an eye out for next year’s. Coming up, Global Dance Music Festival, and BOO! AZ will also use Rawhide to showcase talent including Bassnectar, Excision, Alison Wonderland, Ghastly, Herobust, and a ton more.