RB Exclusive Interview: Diving into the Details with Duelle

On Friday night of Dancefestopia, the rain began to plummet Kansas City. Running backstage, I came upon trailer number 3 and sat down with the sisters of Duelle. There were about seven or eight of us crammed into the trailer to wait out the nasty midwest weather.

It was 11:30pm. Duelle was supposed to go on in the next hour and a half. Event representatives kept coming in and out of the trailer, giving us mixed info on whether or not the ladies would get to perform. Performers were leaving, but Duelle was down to stick it out and even play the next day if it came down to it, which they ended up having to do.

Finally, we got to talking about their latest projects and what it is like being women in the electronic music scene. Conversing with the Danielle and Gabrielle was just like talking to one of my girl friends. Diving deeper into their experiences producing music gives the community a better understanding on how things work behind the scenes:

Where did you decide down the line that a female duo was the career path of choice?

We’re sisters and ever since we were little we always wanted to do something together. We were actually dancers first. We started making music about nine years ago. We’ve always been into the same things so it just made sense. We would make up dances and write songs together. As time went on we both went to college for dance then came back together and recorded our first demo in 2008. 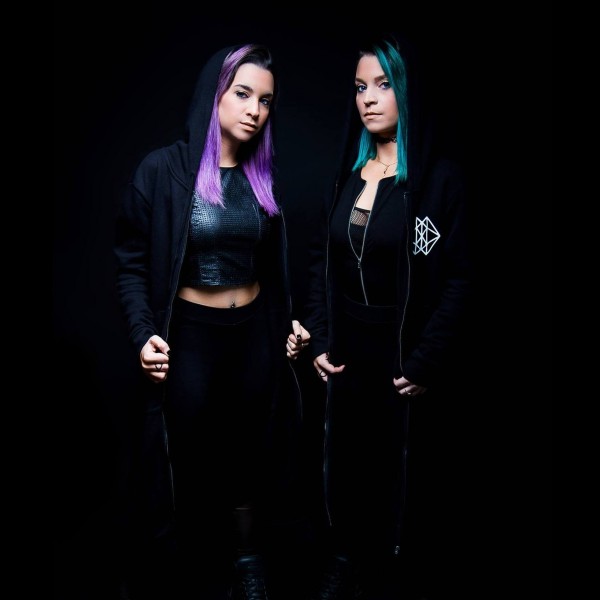 How is the production of your tracks and sets divided up between the two of you?

Danielle mainly mixes and I (Gabrielle) am mainly on the mic. I keep the crowd going because it is super important, especially at festivals. You really have to be super in it. With our sets we play a lot of trap mainly. In the middle we always drop a little future house to give it a little break and chill it out for a second. We do all live locals as well.

Which musicians inspired you to start producing your own music?

We were always super into hip hop. You wouldn’t think so but for years we were really about it. Brillz was a huge influence as well as Antiserum & Mayhem. RL Grime, we love him. EDC Vegas this past year we watched his whole set and it was just.. oh my gosh. 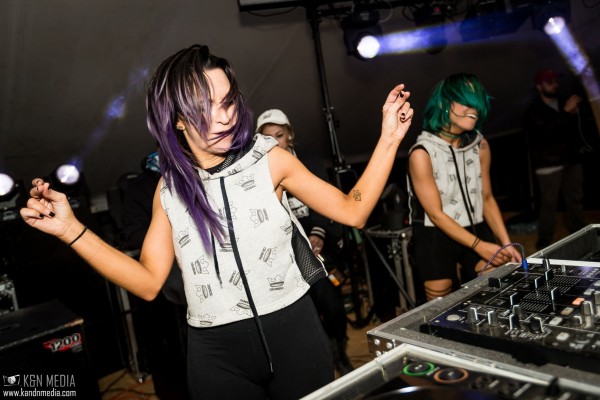 Do you think you will always keep the purple and teal hair? How does it represent your brand and personalities?

I think eventually we will change it up. Right now it is super branded so we’ll go with it a litle bit longer, but we were actually just talking about eventually a change with what we’re going to do. You always have to experiment and change it up. The purple and teal hair came about because when we did our logo and rebranded a little bit.. We started off with diamonds. We had them in purple and teal because they’re our favorite colors. We decided to brand the entire thing and dye our hair the two colors. Our personalities are outgoing and bubbly, so the colors represent those aspects. On top of that, we’re always wearing black to express our edgier side.

Being women, is there anything you feel you have to tolerate that male producers do not?

Always. Every day we experience this. It’s crazy because we’ve been in the scenes for years and have networked the shit out of it. We’re friends with everyone and the guys definitely have mad respect for us. At the same time, we feel as if they do not like to support it. They’re skeptical. They have their cliques, but then when it comes to the girls it’s different. It’s with all of the girls, and we are trying to figure out what to do about it. We’re linking up with some other girls to work on it because it really is a problem. There’s not many girls on large festival lineups. It’s just the way it is in every field now, but it will change in the future.

Are there any advantages being women in the scene?

It’s pretty sad that we really have to think about this. You would think it would be easy, but only really if a bigger artist puts you on as a girl. You can hang and be at a certain level, but you almost have to be put on by a larger artist to build respect and get to the next level. It’s like that for many male artists as well, but females it’s really what you need to do to get exposure. 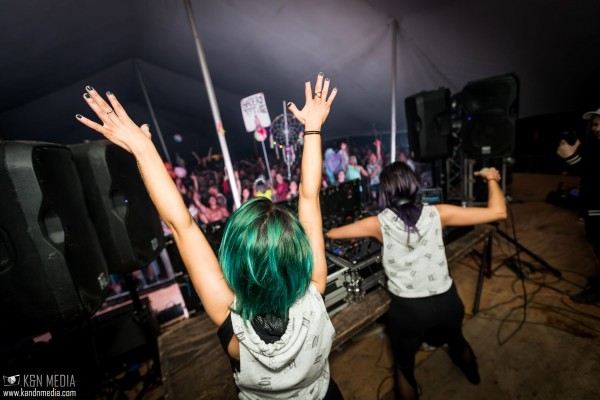 Which experience have you had being on tour/playing a festival that has been the most memorable to you two?

TomorrowWorld! It really is the most memorable. There was something about the vibes that day. We were going through a lot that day before our set. Our set got cut down and it kept raining. We were the first trap girls to throw down on that stage. We were the one set that was only 30 minutes. Everyone else had an hour, so we had to go hard! We just crushed it. To this day, people always come and tell us they get chills because of our set. That was definitely our best experience. A lot of memories. It was just crazy.

Obviously you like working with trap the most. What other genres do you enjoy dabbling with?

We are into future bass because it begins with trap elements and becomes a bit more melodic. It’s really pretty, and we sing too. Like our track with Ricky Remedy, “Stuck on Me,” it still goes hard but in a different way. We make a lot of mainstream stuff as well. Our first single that came out off our latest project, “Want It All,” is a good preview of where our music is heading. It’s heading in a different direction. There’s a lot of structure in addition to our urban trap components, but it is more mainstream.

Duelle – Want It All

Sitting with Duelle and their crew felt normal. I had such a blast interviewing them, for they were genuine and pleasant to be around. These ladies throw down the beats in addition to having the voices of angels. The Duelle girls have the personalities to do great things in the world. It is going to be very compelling watching where their careers will go in the future.