The new OWSLA release, ‘Never Gonna Leave,” produced by the talented Aryay, wows fans with its uplifting and joyous tempo. Being Aryay’s first released song in over a year, fans were anxiously awaiting what was in store for this track. His last single, ‘VICIOUS’ became a hit in the EDM community and with a heavy fanbase, Aryay was ready to show off his growth through this unique upbeat banger.

But support to the song was not all Aryay was hoping to gain from this track. When listening to the song, it is a celebration with instrumental horns, dragging synths, choppy vocals tied together with just the right amount of bass. In reality, Aryay regards the serious issue toward violence of the youth of Chicago.

Depicted in the ‘Never Gonna Leave’ music video, the upbeat song turns into something much more meaningful, as the bittersweet video comes to a close, stating that “In 2015, there were 509 murders in Chicago. As of Sept. 26, 2016, there have been 556 murders.”

Aryay also posted this heart wrenching message to his followers after the release of the single: 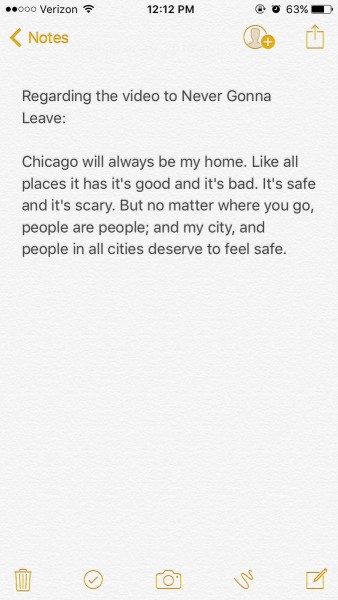 The moving package of song and video is one that is not seen very often in music nowadays, and the upmost respect goes to Aryay for starting this movement.

Visit owsla.com/aryay to donate to Kids Off The Block, a non-profit created to support the at-risk kids of Chicago. Those who donate are automatically entered to a contest, where the winner will get live production lessons from Aryay himself, along with a 2 month Splice membership.