India is about to get LIT: EDC India is a Go!

The Electric Sky is about to get a lot wider. Because of the relentless electro-enthusiasts all over the world, Insomniac is excited to launch EDC India.

40 artists from across the globe with gather at Buddh International Circuit in Delhi on November 12 and 13 to create a momentous first Electric Daisy Carnival. Heavy headliners have already been announced, including Steve Aoki, Alesso, Afrojack, Brillz, Tommy Trash, R3HAB and Yellow Claw… wow. 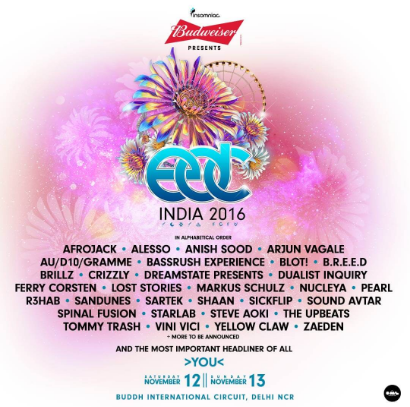 The festival will have three stages- kineticFIELD, circuitGROUNDS and neonGARDEN- all with mesmerizing stage designs, interactive art and larger than life carnival rides.

On the Electric Daisy Carnival website, Insomniac writes, “India has a huge youth population that loves electronic music but hasn’t been treated to the type of fully immersive, high-quality festivals you find in the States. We’re pretty sure November 12 and 13 are two dates attendees won’t forget!”

Insomniac is partnering with Only Much Louder (OML), a Mumbai-based media company, and Budweiser to blow India’s minds with the newest leg of EDC.

This two-day rave isn’t the only party to take India by storm. Thanks to Budweiser and its new campaign “Always Brewing,” Delhi got a taste of what’s brewing in the music world with the brewing company’s first event “What’s Brewing in Delhi” this past weekend.

The festival included 11 eclectic artists on three stages; the Underground, the Ghetto and the Club. Each presenting a different genre of music, the Underground featured electronic music with performances by Paraphoniks, FRAME/FRAME and BLOT, while the Ghetto stage was inspired by New York hip-hop with Anushkha + Agent and SICKFLIP taking the stage. The last stage was based on the progressive-house stylings of Amsterdam clubs, and had the Progressive Brothers, Zaeden and Kerano show Delhi how it’s done.

The Budweiser campaign focuses on the brand’s core principles of freedom, realness and motivation in today’s millennials, who, like Budweiser and the EDM industry, are always striving for improvement.