RB Exclusive Interview: Bear Grillz — The Bear… Not the Man

Deep in the forests of Colorado, surrounded by trees and nature, we stumbled across a stream. With a plank of wood next to the bed of the stream, we placed it in the water and jumped aboard. As the water pulled us further and further into the forest and night began to cast over the canopy above, an odd resonating boom could be heard across the forest.

The water calmed and the booming was louder. The raft stopped and through the space in between the trees lights were flashing multi-colored. As we approached theses lights the sounds became more prominent. As we stepped into an open field there was the most… magnificent thing we have ever seen:

A super-chill bear sitting atop a throne of finely carved wood, wearing a crown of gold, sipping a goblet of honey, surrounded by a number of scandalous looking bunnies and beavers. We knew we had to get a few words:

How did the idea of Bear Grillz come about?

See the way that the birds and the bees works is that it takes a man and a woman to “get” together and then 9 months later a stork delivers a swaddling baby, GEEEZ. other than that i don’t know what you mean….. i was born this way…. aka i got it from my mama. 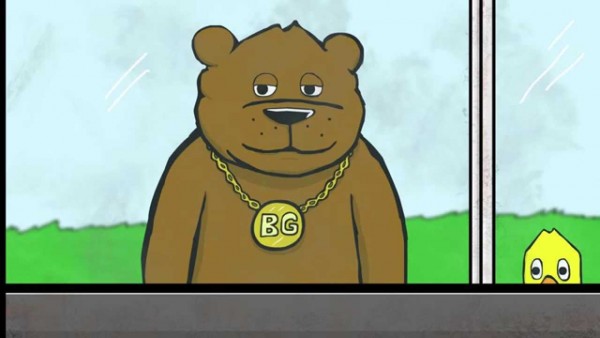 You’ve created yourself a brand out of wearing a bear costume. Why did you choose a bear? Why not any other animal?

I’ve been wearing a costume this whole time? Holy f*ck…. i thought i was a real bear. Why didn’t anyone tell me this?!?!  ***drops mic *** walks off stage

What would you say provokes the profound (intense) sound that is Bear Grillz?

I see you were in Australia not too long ago. How can you compare and contrast the scene in the United States vs. the scene down under?

Well first and foremost, my cousin Koala Larry said things get pretty lit in australia but when i got there it was completely different. everyone kept calling me a cunt. needless to say i ended up in jail 4 times and i kept getting fondled by this weird looking transvestite sheep. i was wasted so i finally gave in and now i have this weird looking sheep bear following me around and calling me daddy.

Did/how did your Australian tour inspire the track “Going Down Under?”

Actually had nothing to do with Australia….. i had a crazy night with a hyena and lets just say things got pretty crazy “down unda” you know what I’m saying???

Along with your musical production, there is the Bear Grillz Series on Youtube. What inspired the series and how does it represent your brand?

Well i had heard about this guy named DJ Pauly D and the show Jersey Shore so i figured why not have a camera follow me around and get some video. Sounded like a good idea until on the first episode they caught me f*cking my pet rabbit. All my sponsors dropped me after that.

Bear Grillz Episode 1: “A Walk in the Forest”

What is your reasoning for revealing your identity on Jerry Springer?

I didn’t even know what a Jerry Springer was but hey i’ll never pass up a chance to get even more famous than i already am.

Anything you can reveal to the kids back home about your upcoming tour The Bear Grillz Show?

Just get ready for some heavy wubs and some craziness. You never know whats going to happen when i come into town. for example my last time in colorado, i didn’t know weed was legal so i ended up getting the entire crowd high. i ended up not performing and we just sat on the dance floor and ate cookies. best show ever!

Which venue is your favorite to perform at?

My favorite venue has to be any one in Colorado. weed is legal man. need i say more?

Let’s just say we convinced him to stop off here in Arizona, and guess what?! It’s this weekend! Get your tickets to Bear Grillz this weekend at Monarch Theatre… and lets just say, if this interview is any indicator of the night its going to be, you’re probably going to want to grab those tickets.