Fall in Love With the Crush 2017 Lineup

Finally, the moment we’ve all been waiting for.. The Crush 2017 lineup. Once again, we’re partnering with Insomniac to bring you nine well-versed musicians from across the globe. Yellow Claw, W&W, DVBBS, GTA, Black Tiger Sex Machine, Jason Ross, SayMyName, and Chris Lorenzo will be heading to Rawhide to break some hearts.. and some necks. 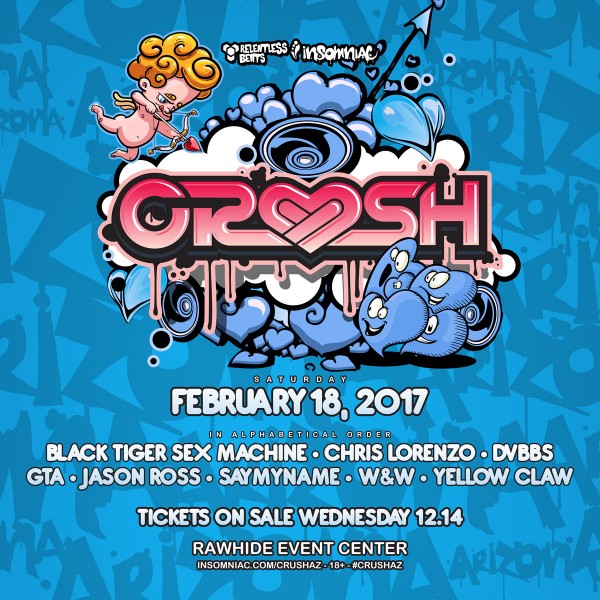 Coming to Crush with their live performance consisting of drums, synth and other sounds is Black Tiger Sex Machine. Their set will be distinctive, for they will be wearing their Tiger Helmets on stage and using live instruments to supplement their electronic fundamentals.

BTSM’s upbeat vibe and thrashing tempo will have the crowd experiencing something they have not been seasoned to. Once their performance begins, you’ll find all of the bass heads rushing onto the floor. Welcome To Our Church, their latest album, parades listeners with both an original LP and remix LP version, and to say the least, it’s mind blowing.

Chris Lorenzo will be accompanying us to start the night with his deeply driven sound. As you all walk through the door, you’ll hear Chris laying it down.

Chris has made his way all over North America this year. His booking agent’s line must be ringing off the hook, hence Chris has popped up on lineups across North America such as Shambhala, Paradiso, EDC, and Nocturnal. We are delighted to have him at this year’s Crush, so arrive on time to catch his imperative start to the night.

Another duo coming down for Crush is DVBBS. Canadian raised brothers, Alexandre and Christopher, have been working on the project since 2012, but have become accustomed to each other’s proficiencies throughout their lives. Doing so, the two work very well together to manufacture their very own style of producing.

If you scroll through their Soundcloud, you’ll find genres of every interest. Some tracks consist of a light-hearted lyrical touch, while others are energized with heavier material. Their newest EP, Beautiful Disaster, proves just this. The composition consists of features from Gia Koka and Juicy J, as the two artists give a completely different feel in addition to the energy brought by DVBBS’ beats.

Also grindin’ with a fresh album out, Good Times Ahead, is GTA. With hip hop, trap, and electro elements present throughout, GTA exposes their expertise with this new series of tracks. After all, Vince Staples, What So Not, and Tinashe all have a hand in the album, pumping in a high volume of versatility.

With their push for a genre-free world, the two operate to achieve a mash of counter-active components. GTA has become familiar to most due to their highly energetic performances, so surely they’ll smash it at this year’s Crush.

Also joining us with his progressive, house feel, Jason Ross.

Jason’s career really kicked off in 2014 after his release of “Burma.” Since then, he’s been named an artist to watch by LessThan3 and YourEDM. Artists such as Armin van Buuren, Tiesto, Seven Lions, and Kaskade have all recognized Jason for his talent and ability to get everyone on the dance floor up on their feet. “Burma” was just the beginning for Jason, so come witness him as he builds up the beats.

Growing up in a world of music as his father was a hip hop DJ, SayMyName has developed to be one of today’s most talented hard trap producers. When he brings his skills to Phoenix in February, he’ll be warming everyone up as he converts the crowd to a room full of headbangers. His tracks go absolutely berserk.

Recently featured on Slander’s remastered version of their Duality EP, SayMyName tears up the original track, “Dead.” Other than his remix of Dead, SayMyName has also released a rendition on UZ and ATLien’s, “Cavern,” as he brings his twisted up trap directly into the track. All of SayMyName’s remixes are exceptionally intense, so your bass face will be brought out from the get-go.

Willem and Ward of W&W have been transcending in today’s electronic scene, for their combination of talents have provided them with the opportunity to land on this year’s Crush lineup. Coming from the Netherlands, these two will bring their synth inspired sounds to sooth.. yet unsettle the crowd.

Other than showcasing their music live at festivals and other events, W&W has been busy hosting their own radio show on SLAM! every Friday night. With over 300,000 listeners a week, the show has allowed W&W to consistently toy with music of numerous tastes. The show gets thrown on Soundcloud once it has been completed so everyone has the opportunity to listen, but don’t miss the opportunity to see them live on February 18.

Recently, Yellow Claw has been stepping up their game. Their latest album, Blood for Mercy, catches one’s eye with the cover’s risque artwork. With 27 fully nude women lying in the formation of their logo, you wonder what else Yellow Claw exposes within the album.

It’s been a tough year for the used to be trio. Bizzey, their former MC, left the group to spend more time with his family members. Jim Taihuttu and Nils Rondhuis decided to move forward with the group at an accelerated rate, coining the phrase “Yellow Claw will never die.” With tour dates in Indonesia, the Czech Republic, Los Angeles, and Puerto Rico this month, it’s obvious their music continues to gain recognition around the world, so catch ‘em in Phoenix for the 2017 of Crush Arizona.

With that, the Crush 2017 lineup is packed with some of the most versatile musicians of today. This year, all of these artists have been composing some of their best work yet, providing their listeners with the urge to witness their live performances. After listening to their new albums, EPs, and singles, buy your ticket to Crush and fall even deeper in love with these artists.