2016 was one rollercoaster of a year, and I think it’s safe to say that most of us are ready for a fresh start in 2017. Lucky for you, we’ve got just the way to close out 2016 with your stacked Decadence NYE AZ lineup.

And there is plenty to look forward to in 2017. When it comes to festivals and club shows, we’re hooking Arizona up with some of the top names in EDM. We’re stepping it up this year when it comes to festivals, bringing you the massive production and unreal lineups. But we aren’t stopping there; we’re proud to bring you the very best in the scene to intimate club venues. Check out some of the highlights of what we’ve got planned for you this spring:

It’s not every weekend that a techno legend makes his way to Phoenix, but this month Arizonians are in for something special as Umek, the man said to be responsible for kick-starting the electronic music scene in Slovenia makes his way to downtown Phoenix.

Umek has played some of the world’s biggest festivals and continues to captivate fans with over 100 gigs per year. Umek’s influence on the electronic dance world has not only shaped a genre, but has inspired a movement.

Experience Umek for yourself at Scarlet at Monarch, our first RB Deep show of the year.

Wiwek is known for fusing electronic elements with tropical rhythms to create a distinctive and refreshing sound. This “godfather of Jungle Terror” is making his way to Phoenix in 2017 for an intimate 21+ show at Shady Park.

Grab your crush and get ready to feel the love with a massive production and loud booming sound. Relentless Beats and Insomniac Events are proud to present the eighth annual Crush Arizona 2017, the biggest Valentine’s event in Arizona!

The line up is better than ever with eight of the biggest names in EDM: Black Tiger Sex Machine, Chris Lorenzo, DVBBS, GTA, Jason Ross, SAYMYNAME, W&W and Yellow Claw.

We just can’t get enough of Datsik and on Wednesday, Feb. 22, Arizonians are in for a special treat.

Joining him on the road to open each show will be “Crizzly” and Germany born “Virtual Riot”. Datsik’s Ninja Nation tour will also introduce his latest stage design, the Shogun.

“The next chapter for Datsik is an amalgamation of my wildest vision to date,” he said in a statement. “After touring with the Vortex previously, I’ve wanted to create something unique that will stand out from the rest, and embody what it is to be a rave ninja.”

2016 was a monumental breakout year for our girl Rezz. From a slew of festival appearances to captivating listeners with her hypnotizing industrial techno, she’s quickly made a name for herself on the scene.

Rezz will be kicking off 2017 in style as embarks on her debut solo headlining tour across the US and Canada in support of her recent EP.

TRANSMISSION INCOMING: Phoenix Lights 2017 touches down on April 8 and 9. Don’t miss this massive lineup, otherworldly sound, and production that is from another planet.

“Phoenix Lights 2017 is the follow up to last year’s second annual edition of the festival that took place in the heart of Downtown Phoenix with acts such as Kaskade, DJ Snake, Eric Prydz, Excision, and many more. Lights returns as an even bigger festival spanning two days with multiple stages and the biggest names in EDM.”

Kick off your summer with Arizona’s biggest pool party of the year! On April 29th, Wet Electric takes over Big Surf Waterpark in Tempe, Arizona and will produce the largest festival & pool party in the country. 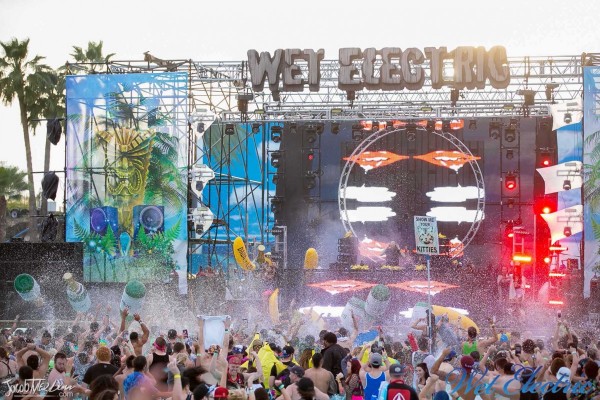