Weekend Pass tickets are NOT transferable once redeemed at the event. You will receive a wristband upon admission on Friday that will scan for admission on Saturday. This wristband will not be valid for entry on Saturday if removed or tampered with. DO NOT REMOVE THIS WRISTBAND.

Decadence Arizona is back and bigger than ever! Join us for Arizona’s BIGGEST New Year’s celebration on December 30 & 31, 2016. Previous Decadence AZs featured performances by Jack Ü, Above & Beyond, Pretty Lights, ODESZA, Adventure Club, Kaskade, Fedde Le Grand, Flosstradamus, DVBBS, and more! Stay tuned for artist announcements and more as we prepare to turn Rawhide’s Frontier Hall into AZ’s biggest super-club for two nights.

New Year’s Eve is the final night to indulge before beginning a journey into a new year: embrace self-indulgence and extravagant excess as we lower our inhibitions to live lavishly and let loose in luxurious fashion one final time in 2016! Decadence provides an elegant backdrop to a sophisticated, adults-only playground that will house America’s Largest New Year’s Eve Dance Celebration. Beautiful music lovers from around the globe will don their finest attire and gather in the valley as we continue our decadent tradition of a year-ending celebration!

Need a place to stay? We have partnerships with some of the most trendy and convenient hotels in the Valley to ensure your time here in Arizona is spent luxuriously. Check out our Hotel Partners below:

Moxy – Located in the heart of Downtown Tempe, indulge in the festivities of campus life during the day, before making your way to the show. Standard room rates include travel to and from the event! Book your room now: http://bit.ly/2aUnxkB

*Room reservations are on a first-come, first-served basis. Don’t miss out on these special rates as rooms are limited.

Wise beyond their years and aggressively handsome, these two overachievers are focused on success… Never before has the world seen two furry browed individuals such as these two (seriously we have really bushy eye brows)… As you might have imagined Alex and Drew did not … Read More

Nurture is the act of tending something frail into blossom; of patiently caring for something so it may grow. No wonder acclaimed producer/songwriter Porter Robinson turned to this word for the title of his second album. A joyous, brave explosion of electronic ideas, introspection and … Read More

Zedd started with music in his daily routine from early childhood on. Born Anton Zaslavski, Zedd was raised in Kaiserslautern, Germany by two classically trained musicians, he began playing the piano at the age of four and built up his knowledge of the Classical repertoire … Read More

Genre blending has always been a core tenant of Jauz – the project of 21 year old LA-based and Icon Collective graduate, Sam Vogel. Over the course of the past few months we have seen the young star rise, turning in some of the biggest … Read More

Launching his music career from his freshman dorm room, the Los Angeles-based 22-year-old producer/DJ, Justin Jay, has already seen success that extends well beyond his years, but he is surely not resting on any laurels as he further refines his expertise as a true artist. … Read More

Hailing from Southern California, Kennedy Jones is no stranger to bass music stages in the United States. Having had great success with his prior collaborative project which was predominantly Dubstep oriented, his last release with the duo was signed to Ultra Records. Having been a … Read More

Kill Paris began his journey into music composition at age 16 learning how to play the guitar, which soulfully reflects in his Future Funk style and bass guitar riffs in his music today. After receiving his recording arts degree in Florida, he moved to Nashville, TN, … Read More

With a huge explosion onto the electronic dance music market, young , San Diego-based producer, Ookay (pronounced “Okay”) left a permanent mark in dance music in 2013. With a rapid growing fan base and comedic twitter persona, Ookay has proven himself to be one of … Read More

While only in his early twenties, Dutchman Sam Feldt has become quite the deep house tastemaker of his day. With amazing remix work as well as solid hits like the early 2015 release ‘Show Me Love’, which proved to be his definite claim to fame, … Read More

Whether it be their electric performances, heartfelt production or lasting friendship, dance fans around the world are drawn to the magnetic duo SLANDER. Through their meticulous blend of emotional lyricism and savage drops, Derek and Scott have built a passionate family of fans along their evolution … Read More

Emerging from relative obscurity in early 2007, in just a few short years Tritonal has become one of the most recognizable names on the modern trance and progressive world stage. Both exceptional talents in their own right, Chad Cisneros and Dave Reed formed a prolific … Read More

Looping pop melodies, sugary female vocals, junkets of gleaming electro house—all of these sound fabrics can be felt through the music of Jesse Hughes, who goes by the DJ moniker of Vanic. The Vancouver-based DJ/producer has been quietly releasing a wash of remixes over the past year, … Read More

Comprised of brothers Anthony and Christopher Alfaro hailing from New York City, the art created centers around a single name: “YOOKiE." Bass presence hums through a melody within the artificial: instrumentation computed in utter harmony with the brains of those willing to lend themselves, their … Read More 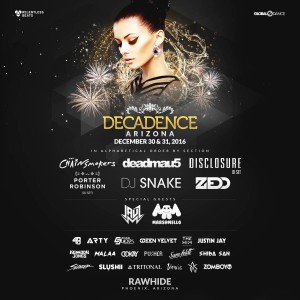