The Hakkasan Group is composed of three top of the line clubs in Las Vegas, Hakkasan, Omnia, and Jewel. We all know the city of Las Vegas never sleeps, but the Hakkasan Group reassures that motive. With day parties, night parties, restaurants, hotels, and other private events, there are options for party-goers of all types.

Hakkasan Nightclub is the original of the three, with restaurants and clubs taking up 80,000 square feet of space. It was built with a very punctual vision in mind, to provide visitors with an elegant experience and host some of the world’s most prominent DJs. This weekend, they’re welcoming some bass-masterminds with Jauz on Thursday and Party Favor on Friday. Following their performances, Vegas residents Tiësto and Borgeous will conclude the week with their steady yet creative ambitions.

As one of the largest club spaces in all of Vegas, every Omnia experience is one for the books. There’s plenty of room for dancing as the venue consists of multiple floors adding up to 75,000 square feet.

Without a doubt, Omnia has one of the most fascinating builds of any entertainment center around the world. It was brought about to compliment the original Hakkasan nightclub and does just so with its elevated ceilings and exquisite interior design. When entering the giant of a space become distracted by the centerpieces that bring this palace together, for they are absolutely stunning. 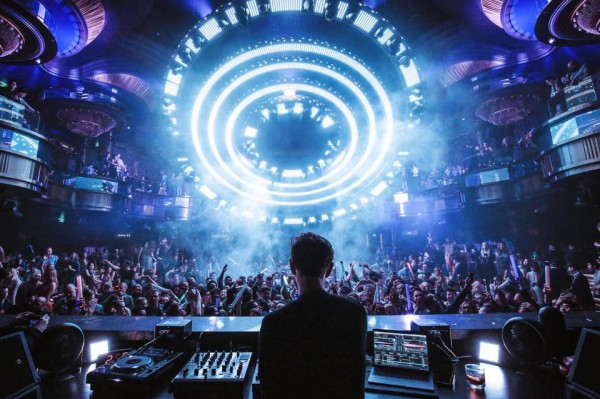 This week, Omnia is jam-packed with artists of all sorts per usual. With two separate rooms for nightlife events you’ll find something to do all throughout the week. On Tuesday, Borgeous will be heading out to make an appearance prior to his showing at Hakkasan the following Sunday. Plus, get pumped for Turbulence, Calvin Harris, Omnia Thursdays, and more.

For a more intimate experience find yourself at any one of the events at Jewel.

Jewel was also designed with very specific intent. It being the newest addition to the family, designers constructed it with an idea unfamiliar to the two original clubs. Assembled in a dome-shape manner, Jewel gives attendees a perception out of the ordinary, for everyone is enclosed within the sphere-like entertainment space as the lights flutter from every angle.

Allow the LED staircases to show you the way into a glistening, world-class experience. Once inside the main room find yourself in awe of the state-of-the-art light structures and services. This week, they’re starting the week off early as usual with Flawless Monday feat. DJ Irie, with Travis Scott following on Friday, and Steve Aoki takes over Saturday to finish the week off strong.

Follow the Hakkasan Group or their individual pages, Hakkasan, Omnia, and Jewel, for updates on future events.