Porter Robinson started off at 18 years old never having stepped foot in a club when he released his debut album, worlds, in 2014 and it’s track ‘Say My Name’ instantly shot to number one of Beatport’s Electro House chart. His success continued from there creating quite the edm legend over just a few short years with a massive loving fanbase and music that he’s performing all across the globe.

Today, Robinson shared with his twitter followers a few bits of news about what he’s working on, and why he took a little break. As his shelter tour with Madeon is coming to a close at Coachella in April, Porter took a moment to reflect on his 2016.

He started off by saying that he is in love with the music that he’s currently creating. He states that he missed working with such passion that was stripped of him due to doubt and depression that “destroyed him” in 2015. Porter shares that working with Madeon on shelter the animation was helpful in remembering that he can still create music he’s proud of and that he will be making few festival appearances this coming year so he can devote himself to his new music. 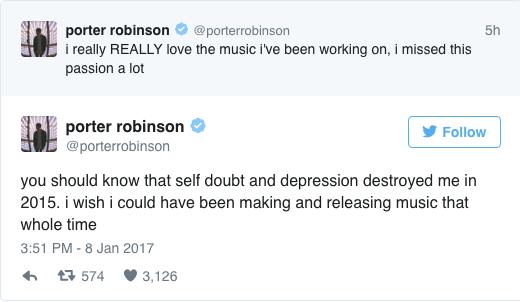 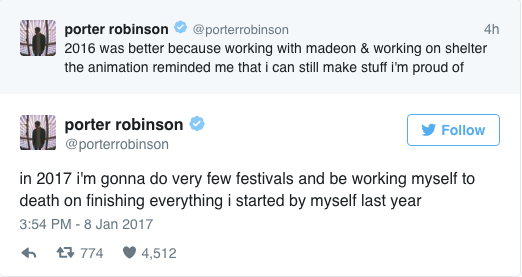 It may come as a surprise to some fans that someone who’s music can make it’s listeners feel so inspired and passionate themselves, was struggling with a depression so deep that it effected his work. While it may seem that someone with fame and success would have nothing to be depressed over, everyone fights their own battles, and this just means that Porter’s fans will appreciate his upcoming music even more because of what he’s overcome.

Stay tuned with Porter Robinson for lots of new music in 2017!