After skyrocketing to the top of the bass world within the last year, Snails announced he will be hosting his own festival, Sluggtopia, for the first time.

Taking place at the notorious Red Rocks Ampitheatre in Colorado, Nghtmre and Joyryde will be also join Snails for the festivities. With these three musicians performing, all areas of today’s popular bass music will be covered. As Nghtmre throws a compilation of trap and bass in your face, Joyryde will drop it in reverse as his set wanders away from the norm. To top it off, Snails will headline with his sloppy sound to finish the night off strong. 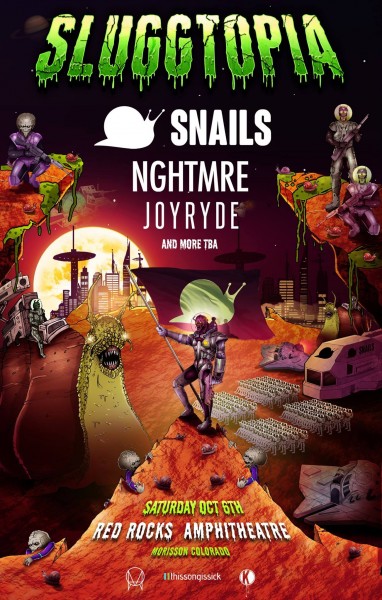 Leading up to the date of the announcement, Snails couldn’t hold back his excitement on social media. To release the official date of the event, Snails featured another one of his gory, vomit-dripping flyers. The flyer exhibits sluggish acts of war as an army of masked creatures march in to take over. It makes you wonder what kind of shenanigans will come about during the event.

One of Snails’ latest tracks, ‘Deep in the Night’ featuring Pegboard Nerds, will give you an idea on what to expect from the king of vomitstep. Pre-sales sold out shortly after their release, but fortunately general admission tickets went on sale today. Grab one and join your fellow slugs on October 6.