NGHTMRE and Slander Bring Back the Gud Vibes

The world of trap has seen multiple incredibly talented artists grow in the scene, but most notably so are DJ’s NGHTMRE and the duo Slander. NGHTMRE and Slander originally met in LA while they were all attending the Icon Collective Music Production school. The trio has since then collaborated multiple times on projects with the most iconic being Gud Vibrations. This subsequently led to their Gud Vibrations tour throughout the country. Slander is well known for their trap beats, a style they’ve called “heaven trap” and the occasional emotional future bass track that they release. Both NGHTMRE and Slander have played through the festival circuit and have headlined festivals such as Ultra, Audiotistic, and EDC.

The duo introduced their iconic Atom stage during their Gud Vibrations tour in 2016 and brought it throughout the country hitting up cities like LA, Portland, and Miami. This tour brought some major heat to any venue that they played at, as they dropped banger after banger and kept the energy so high it felt like the ground was shaking throughout their set. The Gud Vibrations tour was definitely one for the books and now NGTHMRE and Slander are bringing back the gud vibes with another edition of Gud Vibrations and their atom stage as they come to the NOS Center in San Bernardino. 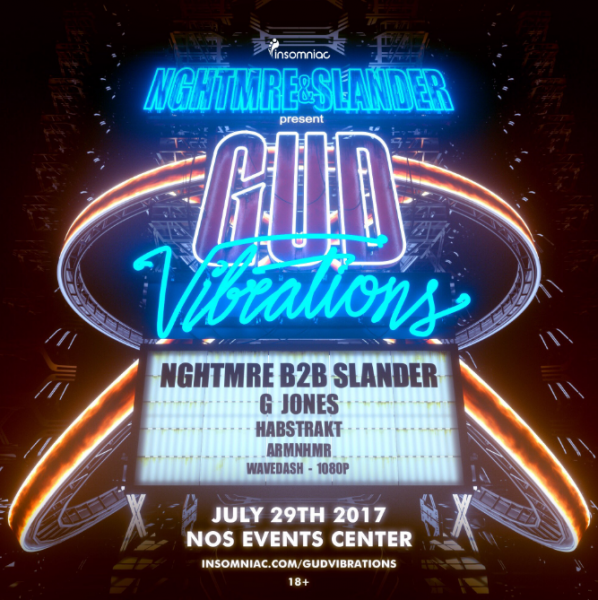 You can grab tickets to the show here.