Whether you just graduated, finished the semester, or you’re simply surviving the holiday season, there are plenty of reasons to celebrate this weekend. And what’s a celebration without a little music? This Saturday we’ve got the Anjunadeep Tour featuring 16 Bit Lolitas, Joseph Ashworth, and Luttrell at Monarch Theatre. 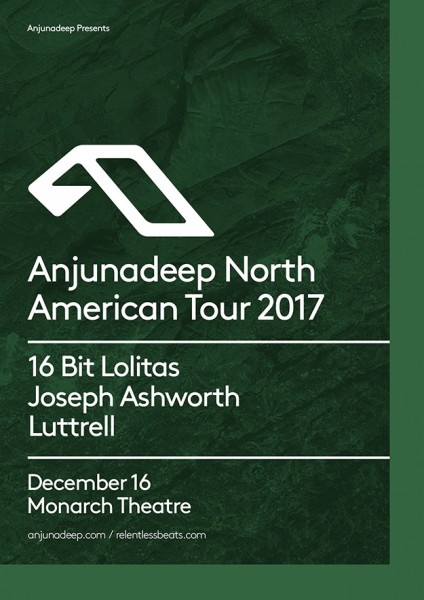 For almost 15 years now, Peter Kriek and Ariaan Olieroock, better known as 16 Bit Lolitas, have been making magical music together. The duo, hailing from Amsterdam, signed to Anjunabeats in 2008 and since then have built an extensive discography, some of their most notable tracks including 2014’s “Deep in My Soul” and “Beat Organ.” Their sound features a moody, contemplative feeling that builds layer after layer, slowly drawing the listener into an intimate, emotional expression that hits you right in the feels.What makes this duo special, though, is that they seldom perform together. Kriek takes on the bulk of the production, while Olieroock tours the globe.

Joseph Ashworth’s music is inspired and enriched by a variety of extremes. This is demonstrated during his working days, spent either meticulously crafting milliseconds of audio, or playing marathon DJ sets in clubs across the globe. Finding the balance between child-like, naïve experimentation and meticulous development and craftsmanship is key to Joseph’s creative process. Grain,  released just two years ago, was Joseph’s debut album and made a significant mark on the electronic music scene and his career. Headliners from all corners of the electronic music scene, from Dixon to Maya Jane Coles, from Kölsch and DJ Tennis to Sasha and Lee Burridge, have shown consistent support, and it’s clear this is just the start of the Joseph Ashworth story.