Nobody is having as good a year as LICK. His dark dialect of music has captured the attention of industry greats making him one of the fastest rising producers in the bass scene. First, he released his debut EP on Zeds Dead‘s infamous label Deadbeats, eventually joining their Deadbeats tour. Since then, LICK has continued to dominate the scene with a full tour schedule booked to close out 2018, a steady release of fresh music, and an electric presence.

I had the chance to speak with him ahead of his upcoming performance at BOO! Arizona. Check it out below. 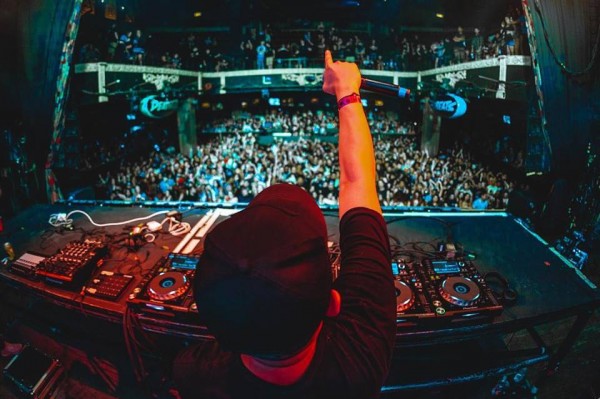 You’ve had an incredible year, to say the least. Let’s start with the release of your REVOLT EP in May on Zeds Dead’s label Deadbeats. How has that EP helped launch your career?

Hi Heather, thanks for having me on this interview! REVOLT has been great! We’re closing in on almost a million streams and for some, it’s not much but its a milestone for me. This EP solidified my vision on how I want to represent LICK in the upcoming releases on DEADBEATS.

Shortly after, you joined a plethora of talent on the Deadbeats tour. How has it been working with the ZD team and all the other artists on the road?

DC n Hooks have been really supportive, and its really just a big family there. I remember joining the day of and Harrison welcomed me with open arms. They’ve basically given me the big shot I was dreaming for in my career. I’ve had the opportunity to be apart of deadbeats radio and go on tour with them and sign my tracks to their label, and that itself is surreal. The lineup this year for deadbeats tour is massive. I think over 40+ artists on the bill. Everyone throws down and its great to be apart of a family that really values the art of music.

You’re being featured on some of the largest lineups in the country—and out! What have been some of your favorite performances so far? Where are you still wanting to play?

I’m really looking forward to seeing where my journey takes me this upcoming year. There are a lot of anticipated places I’m eager to play, but when the time is right, I’ll be there.

It’s apparent you’ve been hard at work in the studio lately. What can you tell us about your latest single “OVER”?

“OVER” was inspired by all the hardships and times we’ve faced as mortals. Our lives are delicate but each trial we face makes us stronger. “OVER” is a tug of war between two emotions.

I saw rumors of a DNB project? *fingers crossed* Any chance we’ll hear more about that soon?

You’re becoming a global phenomenon, but we can’t wait to have you back home for BOO! Arizona. What can fans expect from you?

I’m really excited to be playing in Arizona! October is my favorite month, and I’ve been making some dark Halloween edits. I’m ready to bring the darkness to this stacked lineup. See ya there!

Keys your eyes on LICK who will be joining forces with the Deadbeats label once again for a follow-up EP succeeding his smash hit REVOLT and popular feature mix on deadbeats radio earlier this year. For the time being you can use his Halloween Mix (included below) as the perfect pregame to this weekend’s event and everything leading up to the spooky holiday itself.

You can catch LICK this weekend at BOO! Arizona this Saturday at Rawhide Event Center. Buy your last minute tickets here.