You’ve been asking and we’ve been listening. The house festival you’ve been waiting for is finally here in the form of Origins 2018. Set along Rawhide’s beautiful riverwalk, we’ve concocted a lineup of epic proportions for this festival’s first edition. Take part in an all-day affair with house music and see what this community has helped build. Over the years this event will continue to grow and we can’t wait to see what it evolves into! 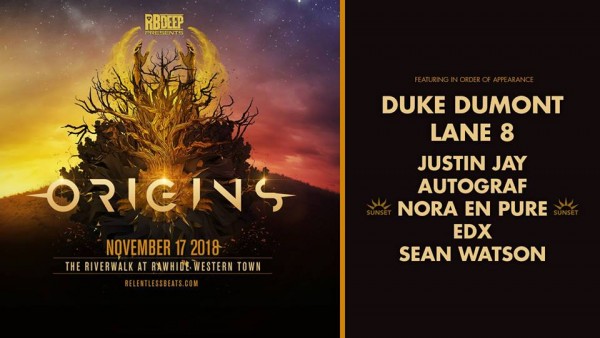 Kicking things off, Sean Watson is a Phoenix local who’s long history in the house scene makes him perfectly suited for a lineup of this stature. EDX has been releasing music for over 20 years and is best known for his long list of singles, collaborations with the likes of Kaskade, and explosive remixes of artists such as Avicii, Tiesto, even Beyonce and Janelle Monáe. Nore En Pure is a goddess behind the decks. Her tranquil house beats will create a perfect sunset set.

Comprised of members Jake Carpenter, Louis Kha, and Mikul Wing, Autograf consistently serves up a fresh take on house music. Their reworks and singles have solidified their autograf on the scene. Justin Jay is a beloved fan-favorite here in Arizona. 2018 has been a great year for the rising star so we couldn’t help bringing him through one more time.

Lane 8 is also making 2018 his year. He released an album, Little By Little, dominated stages around the world both at festivals and on his own tour, and continued adding talent to his own record label, This Never Happened. In addition to that, he continues to release mixes and impress fans on a regular basis. Many often associate Duke Dumont with the face of house music, and for good reason. Best known for tracks like “Ocean Drive,” “Real Life,” and “I Got U,” Dumont provides feel-good beats for all. The Grammy-nominated DJ, producer, and record label owner recently dropped a new house anthem in the form of “Runaway” that should have everyone running to buy their tickets to this festival.

The event takes place from 3 pm to 11 pm at The Riverwalk at Rawhide Western Town and will be 18+. Tickets are on sale TODAY starting at just $39! Don’t sleep on these, they’ll go fast–buy tickets here.