With the massive amount of music being released on a consistent basis, the need to stand out is greater than ever. Artists must take creative risks if they wish to produce something truly surprising or unique, and Feed Me is an artist up for the task. The British producer, born Jon Gooch, has been releasing music for over a decade. He’s commonly associated with the dubstep and drum n’ bass genres, but I’ve always been fond of his softer melodies. His latest project, High Street Creeps, finds him expanding his palette even further, presenting a project full of complex sound that boasts cinematic production levels.

High Street Creeps is Feed Me’s first album since the debut of Calamari Tuesday in 2013, so it’s safe to say fans have been looking forward to this for a very long time. Upon its release, the album debuted at #1 on the iTunes dance charts. All ten tracks seem to be perfectly placed for an enlightening musical journey. Check it out below.

“Perfect Blue” couldn’t be a more appropriate opening track. It begins with a low, muted bubbling that feels like you’re emerging from the depths of the ocean. That momentum continues to build past the two-minute mark before exploding into a fury of synths that set the tone for the tracks that follow. “Shimmer” and “Sleepless” follow a more progressive note while maintaining the techno grab Gooch was clearly going for. In an interview with Billboard, he said, “There’s a certain feeling of suddenly being in a vacuum that you find in techno which I love, especially when DJing. Playing extended techno sets on the deadmau5 tour really opened my eyes to this, and this [“Shimmer”] is one of the tracks which that inspiration led to.” “Sleepless” features the first of many excellent vocal samples to come. Though it’s just a subtle sample, it’s a necessary component that keeps the listener from getting lost in the frantic beats present in the first three songs.

The vibe takes a 180 at “Feel Love,” arguably one of the more approachable songs on the album. Rosie Doonan lends her smooth vocals to a dulcet house melody that makes this track easily consumed by the masses. “Barrel Roll” is where that old Feed Me starts to pop up. It’s energetic, with crisp chords and prowess. Always keeping you on your toes, he switches it up again on “Till the Wheels Come Off” with Graham Fink, another track where the vocal takes a larger role. Accompanied by a pop forward beat, this one sounds like it was pulled right from the radio. I wouldn’t be surprised to hear this one popping up in the festival circuit soon.

We’re approaching the end of the album at this point. Still, the energy does not falter; in fact, it’s about to go into turbo on “Satanic Panic.” Gooch said, “I think it’s sort of a tour of all the individual components that excite me about producing, from [the] synths used to the way it’s engineered.” Throughout the song, a faint ‘woo’ can be heard, only adding to the hype you feel while listening to it. “Pumpkin Eyes” is a highlight of the album. Its guitar use is warm, and the vocal, courtesy of Chaney, is beyond catchy. After one or two listens I found myself singing along. 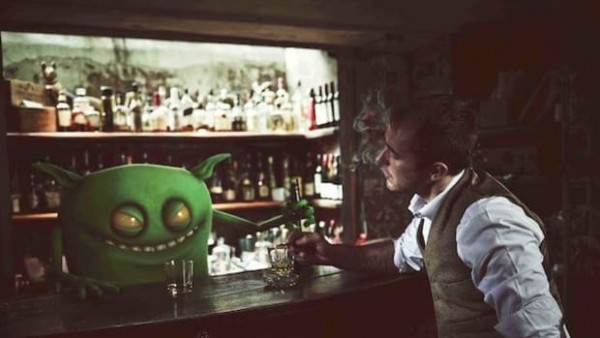 “Own Ghost” is glitchy goodness exemplified. Gooch sites science fiction and cyberpunk as his main influences. It sounds like the soundtrack to your favorite machine-fueled action scene; it’s the type of song that picks up a dead dance floor at the first chord. The closing track, “Defiant,” in both title and lyricism, feels like a metaphor for High Street Creeps. Feed Me is defiant against creative restrictions and genre rules. This latest album shows that Feed Me has not only returned, but he’s fresher than ever. He’s continued to show his versatility and adaptability in an ever-changing market, and whether he’s reinventing his brand or just experimenting with new sounds, we’re interested!