Hayden Kramer, also known as Herobust, has been producing some of the heaviest, dirtiest bass music for nearly a decade. From “WTF” to “Vertabreaker,” almost every dubstep fan has heard his uncontrollable bass before. I had the chance to sit down with him after his massive Bassrush Arizona set to ask him a few questions about his journey as one of the biggest dubstep producers in the scene. 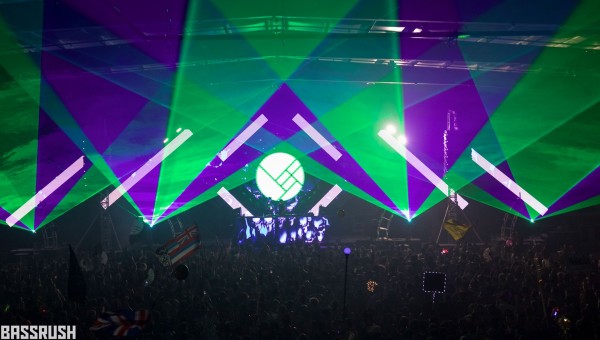 You’ve been releasing music since 2011 and I’m sure you’ve seen a lot of change in the scene since then. How is the industry different than what it was back when you first started?

The emphasis on social networking has gotten more and more important and I think as a result of that you see more of a focus on the artist rather than just on their work. Not to say that their work isn’t important, but you’ll have huge fan bases that just love a person. Getter is a good example. His music is great and his fans love his music, but he’s just such an awesome and entertaining person. Before there wasn’t an opportunity to do something like that because there were only so many ways that your fans could really connect with you. Now, you end up broadcasting your whole life and the fans really get to see who you are and feel deeply connected with you, not just your music

Before you produced EDM, you were making beats for rappers and now you’re combining these two very different genres together. How did you go from making rap beats to producing bass music?

I learned production through making rap beats and I started making music and playing shows and it wasn’t EDM. It was more chill downtempo. I didn’t like dance music and dubstep at all. I didn’t see it in the right context. Once I started playing shows, I saw all these different genres in the right context and I realized how awesome it was. You sit at home in front of a coffee table and put on some dubstep and the average person thinks, “Oh this sounds obnoxious and abrasive.” But you see it in the right context and it’s pure energy. It’s the most indulgent sonic experience you can have. My music just gradually got more and more inspired by the club scene and that energy. It was really a gradual process, it wasn’t like I flipped a switch. It just got more and more dancey. Also, the fact that trap happened as I was making this music was perfect for me because it was a middle ground. It was something I knew how to make and EDM welcoming it at that time was really convenient.

Your live shows are full of energy and one reason why people love them is because you have such a strong stage presence. Before you start performing, how do you get into that mindset?

I wish I had a routine, but I really don’t. It’s like when you listen to your favorite songs by yourself in your room when you were a kid. That very pure energy that you had, that you could only have when you’re by yourself, is what I try to bottle and present on the stage. I think anyone in their element, being that honest and pure, no matter how different they are from you, that’s just an infectious energy. It’s so contagious. You can see someone playing music that you don’t understand at all, but you can understand how hard they’re vibing to it. It makes you second guess your own intuitions and you think, “I want to understand what’s so great about this”.

You have all sorts of performers with different stage presence. If they’re being honest up there, you always end up understanding the music better, so I try and just keep it really honest, like when I was a kid in my room.

“Bruh” is definitely one of my favorite songs right now and the way you processed the vocals to create the majority of the song is pretty incredible. You’ve created similar songs like “WTF” with extreme vocal processing and it became one of your most popular songs. What made you choose that style and was it difficult to make?

Not really. For “WTF” for example, I had made songs that had done well in the past, but I didn’t have a moment to call my own in a set. Riot Ten has “Railbreaker,” Skrillex has a ton of them, but it’s one of those songs that you drop in the middle of a set and it creates a moment. It’s something that everyone knows. I didn’t have one of those yet. For “WTF”, it was me taking a stab at trying to create a moment and luckily it totally worked. Obviously, the lyrics are pretty straight forward so it was easier to pull off. Now I open or close every set with that song and everyone in the crowd knows what to do.

In the past, you’ve released some impressive collaborations with artists like Monxx and Snails. Since your musical talent is pretty versatile, are there any artists, of any genre, who you would want to work with?

Andre 3000 is the top of the list. Most of mine are not EDM because I really prefer to branch out and work with people who are idols to me. Most of the artists I want to work with are hip-hop and Andre 3000 is always the choice. He’s the greatest musician to me.

Finally, what’s one song or artist that you have on repeat right now?

Trippie Redd. (Us, too. See him at Goldrush this September!)