Bass master Riot Ten, born Christopher Wilson, has been crafting headbanger after headbanger since 2012. From the beginning, he has amassed a following large enough to see him drop songs that have changed the game. “Fuck It” on Rottun Records and “Rail Breaker” on Dim Mak put Riot Ten on the map with many more to come. He has graced the stages of Nocturnal Wonderland, Lost Lands, Bass Canyon, Electric Zoo, and beyond. Most notably though, he is responsible for his “Hype Or Die” projects. Not just an album title, but a movement and lifestyle he takes to heart by dropping an EP, hosting his own festival in El Paso, and now the “Hype Or Die” Tour–Bassrush being his second stop! On a scale of one to ten, the riot level is a ten. I got a chance to sit down with Chris to talk about “Hype Or Die” before his set at Bassrush Arizona. Check it out below! 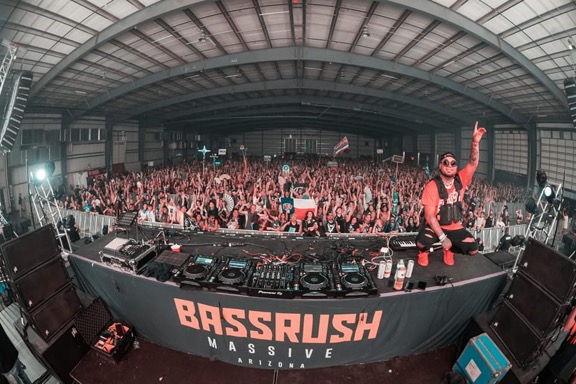 You’ve come such a long way since starting in 2012. What is it like reaching what once used to be dreams, and looking forward, what are some new goals?

I guess for me it still doesn’t feel real, it’s surreal still. I don’t think its kind of hit me. I mean it has hit me, so obviously I try to take advantage of the things I get to do that comes with what I get to do for a living so whether it’s traveling or any of the perks pretty much. Obviously, I’m just thankful to be here and thankful for everyone who’s helped me get here. New goals would just be a better artist. My fans, try to show them appreciation. Try to give back to them, as well. I did a giveaway where I gave like five or six small producers, I gave away studio monitors hoping it would help them make better music or help them in any way. So, I want to continue doing that. That’s another goal of mine, to continue to give back. As far as music, keep on trying to like push the, I don’t want to say boundaries, it sounds a bit intense, but keep pushing myself as an artist.

You’ve released tracks on quite a few record labels, Dim Mak and Insomniac being the most recent. Have you ever thought about starting your own label?

That’s actually my next thing that I want to do. I’m not sure what the name would be, maybe “Hype or Die” because that’s my whole branding. I don’t know, but I definitely want to work with a certain group of people or artists I’ve already supported. I’d like to have them on a label and give smaller artists a platform to be heard a bit more. Me personally, I don’t think I’m a huge artist, but that’s my own personal opinion, but anything helps. So, that’s definitely a goal of mine.

You kicked off your ‘Hype Or Die’ tour last week. Bassrush Arizona being the second stop, what are you most excited for on this tour?

Hmm, that’s a hard one. I’m kind of excited to just get back out there. It’s tiring, don’t get me wrong and I love performing, but it gets tiring. But yeah, I’m really excited to get back out there and see how much bigger of an artist I can become, see if the crowds have gotten bigger or if they know some of my newer music. Stuff like that. But I can’t pinpoint any one thing really, because I think the tour as a whole is what I’m excited for. 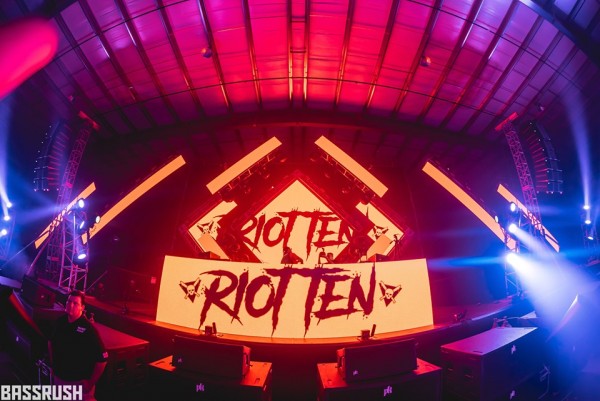 Following up, you also have some amazing artists joining you on tour, how did you decide who to bring?

I think it’s mostly people who I’ve met and all of them have been really nice people. I’ve been really cool with all of them doing their own things. And I see them making progress and I see them playing shows. It’s not a huge process. I go and try to see if they’re homies and if I’m digging the music they’re making that’s some of the ways I decide. Obviously, there are more artists I would love to bring, more artists that I work with, but I can’t bring everyone on tour.

The Sun City EP dropped earlier this year, your fourth Hype Or Die project. What was your favorite part about working on this project?

I liked working with all the other artists on the EP. I think my favorite thing about the EP was I finally got to release the Outro, Sun City (Outro). It’s nothing like I usually put out and so I was very nervous about it. It was something that when I made it, was very emotional for me and it was something I was reluctant, a little bit, for the world to hear. But, I actually got a lot of good feedback from it. That’s probably one of my favorite things about it.

That was my next question. What was your inspiration for “Sun City (Outro)” and will we see more songs like this?

I have a bunch of songs like this actually. I think the inspiration honestly is there’s some days where I wake up and I feel, I don’t want to say depressed that’s a strong word, I just feel like making sad stuff, or very emotional things. I’ll just get on there and start playing with keys and that’s how it works. There wasn’t any direct inspiration, but definitely a sadness or darkness.

I know you must be pretty exhausted this year with the EP, your festival in El Paso, and now this tour. You’re really are living that “Hype or Die” lifestyle, but what plans do you already have on the horizon?

Actually, I have an album releasing in a little less than a month. So, that’s a big one for me. Very nervous, probably most nervous about that. I have three or four hip hop songs in there. I’m not rapping, because I tried rapping when I was 16 and I’m glad I stuck with producing because I don’t know how that would have gone. But yeah, I have another songs that’s very similar to Sun City (Outro), that one’s also very dark and sad. Then some of the songs are my biggest. I have a Say My Name collab on there. I have a super anticipated HIFI one with YTG. So, I have all those on there. I have a couple solos. That’s what I have as far as soon. Trying to do one thing at a time.

Thank you for joining us at Bassrush tonight! I have one last question, how do you come to terms with the fact that you are quite possibly responsible for thousands of broken necks AND rails around the world, some victims here tonight even?

*laughs* How do I feel about that? I’m proud. I’m proud as long as no one gets hurt. I’ve had a couple people take it a bit too far and send me pictures from the hospital. But, I mean as long as they’ve learned their lesson. Got to head bang safe and know your limits and know where the rail is at at all times. But, you know, I’m proud of it. I’m proud to be apart of this whole thing.