Toronto seems to bear the best in electronic music: Zeds Dead, deadmau5, Rezz, and most recently, 13. The incognito producer has risen above the bass community with precision over the last few years, impressing top dogs like deadmau5 and Diplo with two Rezz collaborations “DRUGS!” and “The Crazy Ones” that later led to debut and sophomore EPs on Mad Decent and mau5trap. In a seemingly short amount of time, 13 has curated a sound that’s deliberately distinct, and he’s amassed quite a fan following already. As a big fan of bass music myself, 13 stands as one of my favorite producers because of his meticulous producing style and his obvious passion for music. After meeting him at Boo! Arizona, I’m pleased to see that he’s also extremely down to earth and kind. After chatting about his set that absolutely flattened the crowd, we sat down and got to talking about his music and what the future holds. 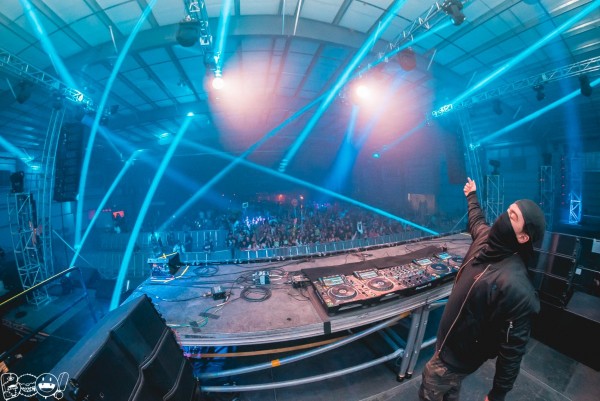 You’ve already toured a lot since your festival debut at Get Lucky earlier this year. What’s been your favorite or most memorable stage to play at so far and why?

The stage of the people’s hearts, he says playfully. I honestly can’t choose one because each of them has their own uniqueness to them and each region brings in a different crowd with their own kinds of things and… do I have to give you an answer? *Laughs*

You and Rezz both have had similar starts both gaining support from deadmau5 from the beginning. What qualities about yourself and your music do you think drew deadmau5 to you?

The bass & midtempo industry is starting to become saturated with new talent, but your sound continues to persevere as supreme to the rest. How do you set yourself apart?

I’d say rhythm. Everybody just makes like ‘WAH-WAH-WAH sounds’. I kind of did that with “Oath” as a joke, fun fact. I made that song in 10 minutes. You’re going to be the first person to ever write that. I’ve never told anybody that. I wasn’t going to release it. I made the idea in 10 minutes, but I actually sat down and worked on it more.

Your release strategy is really impressive, with a lot of anticipation building for tracks like “Uppercut” before two back to back EP drops. How do you plan for releases like that?

Thank you for the nice article on that, by the way. I talk with my management team and we devise a plan and implement it. Pretty straightforward.
Your start to this year was powerful and you’ve followed through strong. What do you have planned for the near future?

Finally, in the spirit of the holiday, what’s your favorite part about Halloween?