Philadelphia native Jesse Kardon aka Subtronics has made a name for himself with his rule-breaking production style and massive range of sounds. The ‘String Theory EP’ sees him adding another weapon to his arsenal for an already impressive catalogue, with seven new tracks, including collaborations with hotly-tipped producers Wooli and Kompany.

Coming off a breakout 2019 into 2020, Subtronics reached new heights on a nationwide sell out tour and notable releases with the likes of GRiZ, Zeds Dead, NGHTMRE and more. The leader of the 40,000+ strong Cyclops Army Facebook fan group shows no signs of slowing down!

The ‘String Theory EP’ starts boldly with the opening track “Nitrous Mafia” as a dizzying build sets you up for its snarling vocal samples, shuddering drops and jagged rhythms. Next is “Clockwork” with a playful melody, hard-charging beats and West World samples. “Melt Ur Brain” with Wooli follows with an almost hypnotic refrain over crashing snares and stabbing synths. 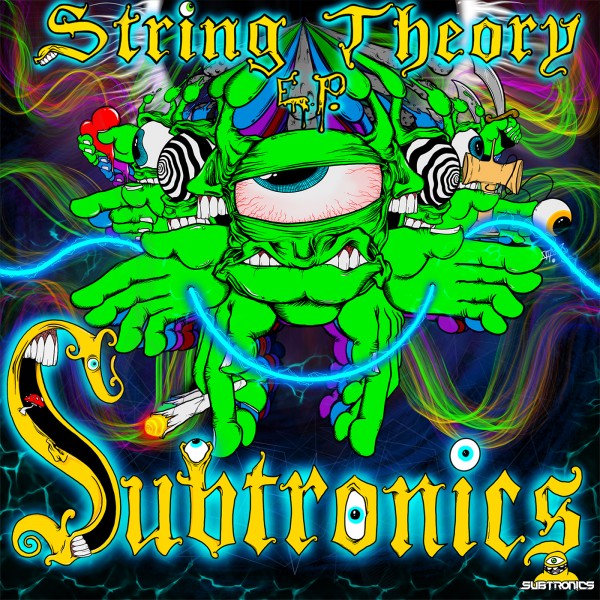 Kompany joins Subtronics on the track “Wicked Witch” picking up the pace with a flurry of drums and funky, robotic drops. Rounding off the EP, we are graced with three solo tracks from Subtronics including the relentless “Broken Code,” epic sci-fi “String Theory,” and downtempo, hip-hop-esq “Professor Chaos.” The ‘String Theory EP’ leaves nothing off the table, as all basses are covered.

Says Subtronics about the EP:

I’m so thrilled to finally share my ‘String Theory’ EP with everyone. It is a direct reflection of the wide range of emotions I have been experiencing through the pandemic. I wanted to encapsulate them in my music which resulted in a unique vibe that is my most honest form. Through this process I stayed true to myself and the sounds that made me happiest, a huge priority of mine always.