DJ, producer, pianist, drummer, and guitarist—Dabin does it all! The Toronto-born musician has become a well-known name in the melodic bass music scene. He continuously pushes boundaries as a producer, and it shows with each new track. To top it off, he delivers an incredible live set, pulling out all the stops for his fans.

Following an incredible set at Goldrush, I had an opportunity to chat with Dabin about his forthcoming album, Between Broken, his beginnings as a musician, and what he’s got in store for fans in the coming year. Check it out below! 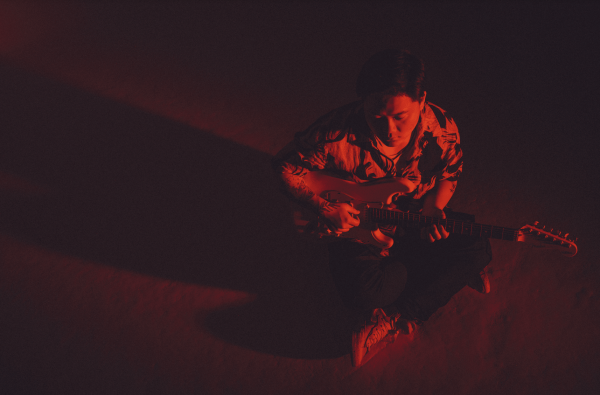 You’ve become a staple in the melodic scene. Did your interest in EDM begin with melodic bass specifically, or what made you gravitate toward that sound?

When I started listening to EDM I was listening to artists like Skrillex, Felix Cartal, and Autoerotique. I was really fascinated by the sounds and how upbeat it was. It was super different from my background of acoustic/folk but also super new and exciting and all I wanted to do was to learn how to make music like that. As I listened to more EDM, I found artists like Nero, Gemini, and Flux Pavillion. These artists encompassed everything that made me fall in love with EDM but was also done in such a melodic way. It was the perfect marriage of energy and melody and I knew that was the type of music I would end up wanting to create.

Your talent on the guitar is incredible. It’s always such a joy watching you perform on stage! I’ve seen multiple videos of you smashing your guitar during a performance. I’m curious, when did you learn to play, and how many guitars do you go through a year?

Thank you! I started playing when I was around 14-15. I grew up playing piano and violin and was super bored of it given that I was taking lessons for it and all I was learning was classical. Guitar was a way to teach myself a new instrument and to break out of the confines of the traditional classical stuff I grew up with. I only do the guitar smashing when I perform with Illenium. I would never want to smash any one of my guitars as each of them means so much to me. But if you hand me a guitar and tell me it’s okay to smash, you bet your ass I’m going to hahaha.

It’s my understanding that your third album, Between Broken, is coming out this October. How will this compare to Two Hearts and Wild Youth? Can you tell us a little bit about how this album was created?

‘Between Broken’ definitely feels much more mature in sound and theme. It feels like an homage to the sounds that inspired me to make music in the first place. Not just EDM, but acoustic, folk, mid-west emo, pop-punk as well. I started some of the songs on the record while I was touring with Illenium on his Ascend tour. I remember thinking how excited I was to go back home and have studio time to flesh it out. Little did I know that we would be entering a year-long lock-down because of COVID-19 so this album basically became my quarantine project.

How long does it typically take you to write an album?

It really depends. I guess typically a little over a year, but some songs take longer than others. Some songs take months, while others I can finish in a few days. The longest part is making the album feel cohesive so I typically like to plan that out before I even begin writing to create a sense of continuity.

Do you feel the pandemic affected your usual process in creating this album?

Honestly not really. I’m such an introvert in the studio that I prefer to write by myself. I know some people are really good in studio sessions, but I felt like the pandemic didn’t change the way I write too much. I would still do zoom calls with the collaborators, but a lot of it was still very much: send project, send notes, rinse and repeat until we are both happy.

What are your goals for 2022? Any plans in the works for a Between Broken album tour?

Absolutely. We are aiming to take the new record on tour early 2022 and am super excited to get back on the road again. As far as other plans, I think I really just want to take a year and write and focus on new sounds!

Thanks for chatting with me Dabin and I’m looking forward to catching one of your 2022 tour stops!