Lucii is authentic as they come as an artist. She’s spent the last five years building a dedicated and engaged fanbase, consistently releasing high quality music and delivering energetic performances every chance she gets.  Anyone who attended the Cyberworld tour this past weekend can attest to that. Lucii slayed a massive crowd at the Avondale Raceway, making her Arizona debut one to remember. We had the chance to ask her a few questions, check it out below! 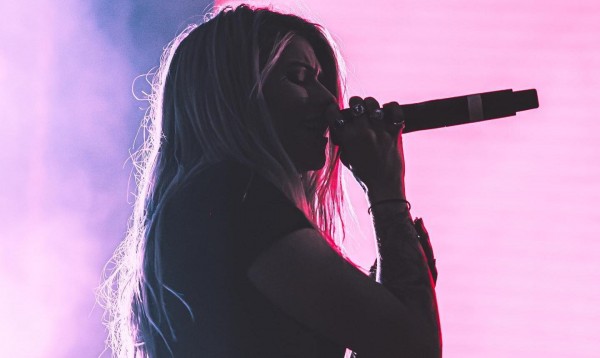 You’ve always been really open and vulnerable about your life online. Is this ever difficult, or does it feel natural to share these moments with your fans?

I’ve always been an extremely honest and open person with my feelings so sharing it with my fans has been very important. With Instagram and all these other social media outlets you only get shown the bright side of life. There’s usually not a lot about the struggles so I feel like that’s what makes people feel alone, so being so open like that with everybody is not only me being who I am but also letting people know its not always rainbows and sunshine.

We know you have more new music on the way. Why was it important for your next release to have no collabs?

Most of my recent releases have been collabs, I struggled with finding my sound for years. I got really in my head about how I was making experimental heavy music and to me it not being heavy enough or experimental enough. I just had to take a break from that and step away and work on other genres. When I did that, I realized that I had a passion for songs, melodies, and songwriting. That’s not to say that I don’t love that heavier kind of music I just didn’t feel like I was being authentic with making it anymore. The love I found for songwriting and singing is just something that I’m wanting to bring more to the front of the Lucii Project.

New music. New show. It’s a new Lucii era! How do you describe what’s to come?

I’m so excited for the new era of Lucii, I love all the songs I’ve been making for the album. I would describe them as more song influenced. I’m singing on all the songs, getting to express my thoughts and energy with my vocals has been great and something that I’m so proud of. There are definitely some edm influences on the tracks and it isn’t a complete departure, but it’s the direction my live shows have been going for the last year and I can’t wait to lean more into that. I want my live shows to be something you can experience. My visuals intertwine with me set to help tell the story I want my sets to tell.

You freestyle on “A Million Pieces,” featured on Blunts & Blondes debut album. Do you freestyle often or was that a spur of the moment riff that just worked perfectly?

For “A Million Pieces” that one kind of just flowed out perfectly and I didn’t think he was actually going to use it so I found it really funny when he brought a more finished version of song to me because we were just having fun. I usually make a rough beat, and then I start freestyling on top of it. Singing about how I’m feeling that day or what I’m going through and then it just moves forward from that point with me finding words or lines that resonate.

You just turned 25—an exciting one! What are some things you hope to accomplish in the next five years?

One of the things I really hope to accomplish is having my own headline tour with my own production. We have plans to add some live elements to my show. Seeing artists like Porter and Madeon’s live shows completely inspired me, and I really want to bring some of my ideas like that to life. I want to keep making music and hopefully makes songs that people relate to and help feel like they are not so alone. I wanna continue finding myself and just performing to people everywhere!

How has the Black Tiger Sex Machine Cyberworld tour been so far? What were you looking forward to most about your stop in Arizona?

The BTSM tour has been really great so far! The crowds always have a ton of energy and I’m really excited for Arizona because I’ve never played. Every single time I’ve tried to, the event has been cancelled, so I’m just really really excited to finally get to AZ and perform.