Arizona-based DJ and producer Ekonovah has just announced his debut tour! The Discovery tour is a testament to Ekonovah’s career growth over the past few years. He’s released on multiple labels such as Space Yacht, DND Records and Insomniac’s In Rotation, and performed at festivals like EDC Las Vegas and Bonnaroo. This tour is a culmination of all those successes to date. Confirmed stops on the Discovery tour include Phoenix, Tucson, Las Vegas, with more to come! 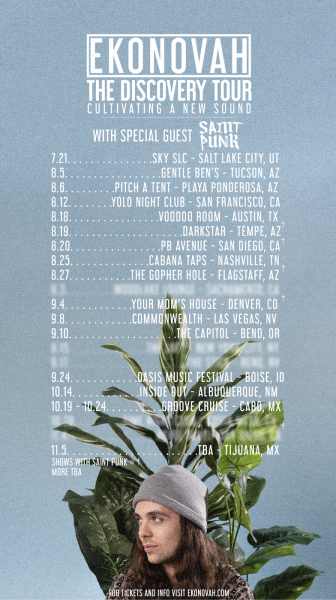 What makes this tour particularly unique is that he will begin writing and producing a song called “Discovery” at the start of the tour and by the end have a completed dance music record. Ekonovah said,

The Discovery Tour is going to be special for so many reasons. It’s my first tour, and throughout the tour I will be writing a song called “Discovery” and testing it at each stop. I haven’t written any lyrics yet or any music because I want this song to capture what I am feeling while I’m traveling from show to show. I definitely haven’t done anything like this before but I know the inspiration will be flowing – I can’t wait!

With the announcement, Ekonovah posted a touching home video on his Instagram from his first recital at just 2 years old! Music has been a large part of his life since childhood, and it’s inspiring to see Ekonovah reach this milestone.

About the tour, Ekonovah stated,

Choosing the name for the tour was surprisingly really easy for me. I have changed so much as a person and an artist over the last couple years. Ever since I changed my sound last year with more vocal-driven projects, it has felt like one evolution after another. Which is exhausting – but also feels incredibly rewarding. I also love to learn new things on a variety of topics when I have free time, I think I’ve always been that way. So without hesitation when my team and I were initially brainstorming details for the tour, “The Discovery Tour” was the first idea for a name and everyone loved it.

We can’t wait to see what Ekonovah continues to do. Make sure you catch his stops in Tempe and Albuquerque this fall!