Hardwell started his illustrious career as an electronic dance music DJ at age 13, and since then he has taken his love for house music every step of the way throughout his life, and  is gradually becoming a leading figure amongst the younger generation of DJs.

For the last couple of years, Hardwell’s overall talent is recognized by the dance music industry as a new, exciting and refreshing take on a scene that continues to evolve and with an apparent everlasting shelf life! If you want to describe Hardwell’s identity and musical development in one phrase then it can be no other than that he’s now arrived in the “Big Room House” sound and has created his very unique trademark as an electronic dance music DJ and producer.

Behind the decks Hardwell never fails to deliver, his exceptional technical skills, variety of music, distinguished looks and that added personal touch make him stand out of the electronic dance music crowd, and he’s bringing it to the masses now, with performances all over the world! From Sydney to Miami, Ibiza to London.In the last couple of months Hardwell toured with Tiësto through North America and he made his debut at one of the worlds biggest dance events “Sensation” in Prague. He is coming soon to Scottsdale on December 6th to headline at Smashboxx in Scottsdale, Arizona.

Music maturity came swiftly for the now seasoned-veteran Robbert van de Corput, better known as Hardwell. At the age of 25, the ripened heavyweight has created a legacy that would put most of his counterparts to shame. An award-winning DJ, producer, musician, label manager, lover … Read More 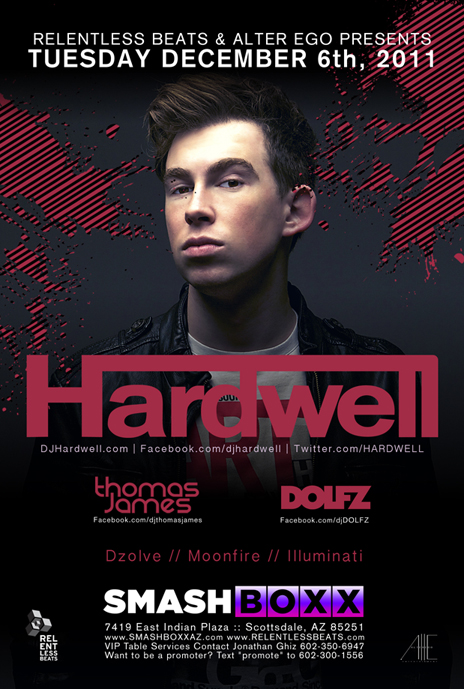