In an effort to enhance fan safety, and to mirror many arenas and venues around the county, we have implemented a clear bag policy for all large attendee events effective immediately.

We define a clear bag as a fully clear or colored clear plastic, vinyl, or mesh bag. One-gallon clear plastic freezer bags will be considered an acceptable clear bag. The maximum bag size that will be allowed is 15” X 15”x 5“. In addition to a clear bag, guests may bring in one small clutch up to 5” X 7”x 2” in size and two factory sealed water bottles.

The following is not allowed into the venue:
NO Illegal Substances
NO Drugs or Drug Paraphenalia
NO Pets
NO Massagers
NO Laser Pens / Pointers
NO Eye Drops
NO Glass, Cans, Cups, or Coolers
NO Markers, Pens, or Spray Paint
NO Large Chains or Spiked Jewelry
NO Stickers or Flyers
NO Tents, Large Umbrellas, Chairs
NO Large Purses or Bags (Anything over 10×10 inches)
NO Open Cigarettes, Lipstick, Chapstick, or Tampons
NO Outside Food, Beverage, or Alcohol
NO Professional Camers – SLR or Detachable Lens
NO Video or Audio Recording Equipment
NO Knives, Firearms, Pepper Spray, Fireworks, or Weapons of Any Kind
NO Toy Weapons or Real Weapons of Any Kind
NO Open Sunscreen
NO Balloons, Balls, Frisbee, and / or Any Other Projectile
NO Native American Headdresses
NO Festival Totems

You may identify him by his trademark mask and hoodie, yet behind the mysterious character is the Norwegian artist, DJ and producer Alan Walker. With more than 15 billion audio and video streams worldwide, and almost 40 million followers across social media, it is safe … Read More

Alison Wonderland architects a world of her own design as its chief author, creator, and voice. The Sydney-born and Los Angeles-based singer, producer, songwriter, and DJ realises this vision at the intersection of future-facing pop, explosive beat-craft, and eternal dance rhythms. Emerging in 2009 with regular … Read More

About Diesel aka Shaquille O'Neal

For the last decade, Dillon Francis has barely stopped moving. Since he first broke out with a series of vivid, vibrant dance tracks, he's maintained a whirlwind tour schedule, playing festivals and shows across the world. In between making hilarious music videos, designing his own … Read More

Lovers of all House music, Courtney Simmons and Emma Montalvo under the alias Gem & Tauri have been involved in the EDM scene for over 10 years attending, working events and gaining a love for the genre, playing underground events as well as supporting acts … Read More

University friends Andrew Fedyk & Joe Depace better known as Loud Luxury have been creating quite a stir in the dance music scene as of late. With just a handful of releases under their belt, the London, Ontario duo has attracted the attention of taste … Read More

Born in Nantes 18 years ago, Hugo Leclercq aka Madeon was introduced to electronic music aged 11, when he came upon a documentary about Daft Punk. A year later, he began learning how to make music. He posted some of his tracks online, but declined … Read More

After a decade since his first release at the age of 23, Australian born Sonny Fodera has created his own brand of groove driven and emotive house music that resonates with devoted fans around the world. With over 50+ million streams on Spotify & Apple Music, … Read More 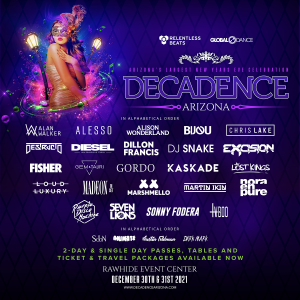