CLEAR BAG POLICY: In an effort to enhance fan safety, and to mirror many arenas and venues around the county, we have implemented a clear bag policy for all large attendee events effective immediately. We define a clear bag as a fully clear or colored clear plastic, vinyl, or mesh bag. One-gallon clear plastic freezer bags will be considered an acceptable clear bag. The maximum bag size that will be allowed is 15” X 15”x 5“. In addition to a clear bag, guests may bring in one small clutch up to 5” X 7”x 2” in size. Due to clear hydration packs not being readily available, EMPTY hydration packs WILL BE the only exception to the clear bag policy. Last, but not least! Please note that management reserves the right, without a refund of any portion of the ticket purchase price, to refuse admission to or eject any person whose conduct is deemed by management to be disorderly, who uses vulgar or abusive language, or who fails to comply with these or other rules as set forth by the management. Patrons who are clearly intoxicated or under the influence will not be admitted. Assumption of the Risk and Waiver of Liability Relating to Coronavirus/COVID-19 The novel coronavirus, COVID-19, has been declared a worldwide pandemic by the World Health Organization. COVID-19 is extremely contagious and is believed to spread mainly from person-to-person contact. By entering these premises and/or the event, you (a) acknowledge the contagious nature of COVID-19 and voluntarily assume the risk that you may be exposed to or infected by COVID-19 and that such exposure or infection may result in personal injury, illness, permanent disability, and death, (b) voluntarily agree to assume all of the foregoing risks and accept sole responsibility for any injury, illness, damage, loss, claim, liability, or expenses, of any kind (“Claims”), that you may experience or incur, and (c) hereby release, covenant not to sue, discharge, and hold harmless the venue, event promoter(s), vendor(s), and each of their respective parents, members, partners, affiliates, divisions, subsidiaries, and landlords and their respective officers, directors, and employees from claims of any kind arising out of or relating thereto. The following is not allowed into the venue: NO Illegal substances NO Drugs or drug paraphernalia NO Pets NO Massagers NO Laser pens or pointers NO Eyedrops NO Glass, cans, cups, or coolers NO Markers, pens, or spray paint NO Large chains or spiked jewelry NO Stickers or flyers NO Tents, large umbrellas, or chairs NO Large purses or bags (over 15” X 15” X 5” inches) NO Open cigarettes, lipstick, chapstick, tampons NO Outside food, beverage, or alcohol NO Professional cameras (SLR or detachable lenses) NO Video or audio recording equipment NO Knives, firearms, pepper spray, fireworks, or weapons of any kind NO Toy weapons or real weapons of any kind NO Sticks, staff, swords, sabers, or scepters NO Open sunscreen NO Balloons, balls, frisbees, or any other projectile NO Native American headdresses NO Festival totems NO CROWD SURFING OR RAIL BREAKING. PATRONS PARTICIPATING IN EITHER WILL BE EJECTED. The following is allowed into the venue: OK Clear (transparent) bags OK Clear (transparent) backpacks OK Clear (transparent) fanny packs OK Empty non-transparent Camelbaks OK Small clutch up to 5” X 7” X 2” in size OK Non-Professional Still Cameras including Go Pros OK Cell Phones OK Lighters OK Sealed: cigarette packages, tampons, packs of gum, chapstick/lip gloss OK Glowing/illuminated costumes or jewelry OK Sunglasses and hats OK Sealed liquid sunscreen and cosmetic products OK Disposable E-cigs, nicotine vaporizer pens, excluding those with refillable chambers containing visible liquid OK Guide dogs for people with disabilities and other service animals with current rabies certification

BONNIE X CLYDE, the DJ/Producer/Vocalist duo, debuted “The Ride” in July 2015, their first track in a series of hits that exposed the world to their unique style coined “Vocal Bass”. BONNIE X CLYDE followed up with their viral hit “Rise Above” which grossed over … Read More

Herobust otherwise known as Hayden Kramer, is an electronic producer from Atlanta, Georgia. In the short, three year existence of heRobust, Kramer’s hip-hop inspired bass music has been written about by publications such as Billboard, Rolling Stone, The Huffington Post, Vice, and MTV, while also … Read More

Joey Verrando aka He$h is an American dubstep producer from Dallas, Texas. As a skater and punk rocker he eventually found dubstep as a teenager and was interested in the sounds. He$h has toured with Excision, Blunts & Blondes, and more. Read More

Lucii - the Orlando hailing producer and DJ is making waves in 2019. After coming off Liquid Stranger’s ‘INFINITY’ Tour this Spring, she has dialed in her live show and it is nothing short of out of this world. Lucii is also the first woman … Read More

Rarely have we seen someone rise through the ranks as quickly as Boris Daenen, a.k.a Netsky. Leading a wave of new skool D+B talent from Europe with his blend of uplifting, melancholic melodies and heavy dancefloor bass + beats, Netsky’s popularity is astounding. A celebrity … Read More

Los Angeles native, TOKiMONSTA (Jennifer Lee) is known for her unique take on indie electronic/r&b/dance music. Her classical upbringing and eclectic music taste has allows her to create vast textural soundscapes a reverberation that fuses vintage sensibilities with progressive inclinations. Her music has been recognized and … Read More

WUKI is the genre-blending solo project of Denver-based producer Kris Barman. Influenced by the sounds of Detroit ghettotech and Chicago footwork scenes, Barman’s ability to seamlessly mix booty, breaks, electro, and house into hard-hitting club-shakers has become a trademark of the WUKI sound. The Mile … Read More 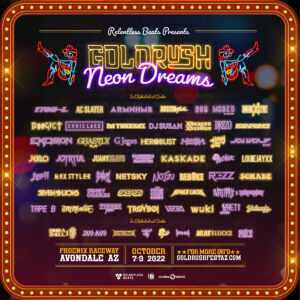